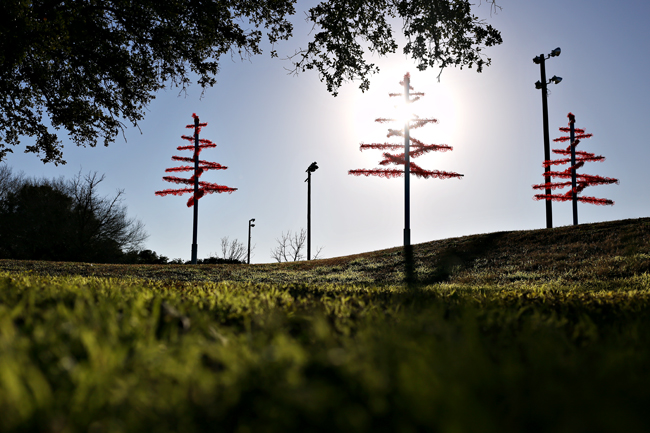 As part of a city project meant to highlight artists’ work and enhance Austinites’ visits to public parks, several artists are installing temporary art pieces to display in public parks in the Austin area.

“We’ve gotten a really great response from the public, and people are really excited,” Bradley said. “A lot of neighborhood groups really enjoy the pieces.”

Artist Lindsay Palmer created “Dazzle House,” which will be installed near her residence in the Rosewood Park area later this month.

According to Palmer, the zebra-like camouflage she uses in her piece was painted on World War I boats to visually distract viewers and make it difficult for them to distinguish where the boat began and ended. Palmer used the concept to comment on gentrification, a process in which higher property values decrease affordability for lower-income residents.

“I am trying to camouflage the kind of smaller, older homes that are being torn down and replaced with new geometric McMansions,” Palmer said. “There is a personal connection for me with the site, and there is also a connection with the theme of gentrification and the fact that the Rosewood Park area is the most rapidly gentrifying area in Austin and probably in the country.”

TEMPO is funded by a 2 percent portion of eligible capital improvement project budgets that are specifically set aside for public art, Bradley said. She said TEMPO has been allotted $75,000 yearly for two years beginning in November 2013.

“If we don’t preserve nature for the future, then we will only have plastic trees,” Scofield said.

Scofield thinks college students are often too focused on working hard and planning their futures to think about issues out of their control.

“Young people have more passion and ability to hope for a better future,” Scofield said. “I think that this piece is a fun, whimsical way to explore a dark idea — a dark theme of loss.”

Brent Baggett said he hopes visitors of his sculpture “Tree Hugger,” which is an abstracted leaf form, will use the site as a place for relaxation.

By constructing a small opening in the center of the piece that viewers can look through, Baggett said he hopes viewers will investigate the piece more closely.

Palmer said the interactivity and diversity of materials in the TEMPO artwork may especially appeal to younger audiences.

“[The projects] certainly speak more to contemporary art than do the bronze and marble statues that [students] may see on campus and on campuses around the country,” Palmer said. “Public art can and should be edgier, brighter and more diverse.”