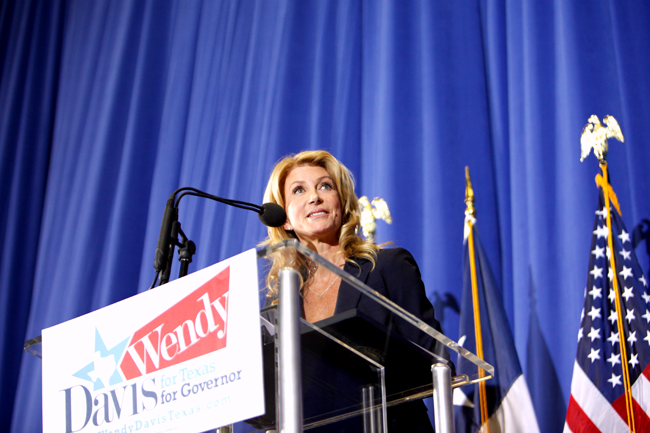 Wendy Davis, Democratic candidate for governor, launches her campaign in Haltom City, near Fort Worth, on Oct. 3.

Davis’ proposals include: 1) guaranteeing the top 20 percent of high school juniors early acceptance into public universities in Texas if they commit to a teaching career, 2) increasing resources for the Teach for Texas Loan Repayment program and 3) restoring funding to the Education Aide Exemption program — all without raising taxes.

Though the plan addresses an important issue — keeping pace with the state’s growing population of schoolchildren — it unfortunately highlights a weakness in the Davis campaign.

While Davis’ education policy appears at first glance to be solid, it is not backed up by hard facts or any sort of implementation plan. Because of this, Republican frontrunner Greg Abbott has successfully attacked Davis’ proposal in one simple statement, calling it “fuzzy math.” And Davis has thus far made no effort to prove him wrong.

Perhaps Davis has avoided going into specifics because she is afraid of alienating voters. If Davis explains how she plans to increase education funding, she might have to commit to dipping into the rainy day fund or eliminating some tax exemptions, both of which could steer her further away from Texas’ predominately Republican base.

Lately, Davis’ claims have been pushing her further and further toward the center; after all, most Texans can get behind her support for increased education funding and improved infrastructure. But voters are intelligent enough to know that her passive rhetoric lacks any firm direction.

The question in this race is not, “What do the people of Texas need?,” but, “How will they get it?” To win, Davis will have to provide a solid answer to this question. And in the process she will inevitably alienate some.

Abbott didn’t offer much in the way of solutions in his response. His campaign spokesperson Matt Hirsch has explained that “Abbott believes in genuine local control of education: Empowering parents, teachers and principals to serve our students well,” but that means just about nothing. In a state that is predominately Republican, it seems, the burden falls on the Democratic candidate, Davis, to get her proposals taken seriously. It might not be fair, but it is the reality.

At the start of the Davis campaign, it seemed that the senator would have the brains and the guts to take on the challenge of convincing predominately Republican voters that she is the best choice for Texas. But much of her initial momentum has now faded away. Although she originally found herself riding high on a wave of public relations-induced euphoria, the candidate herself has not mustered up the personability (or facade thereof) to propel her campaign through the grueling months to come.

Pundits, as well as informed voters, pay close attention to candidates’ campaign platforms, but the cold, hard truth is that elections are often decided on the basis of things as “empty” as likability and approachability. Behind the curtain, many citizens won’t punch the button for a candidate who eschews voter outreach opportunities and consistently gives off an air of aloofness. For Davis, that lesson doesn’t seem to have sunk in yet. Since her famous filibuster this summer, Davis has fumbled nearly every opportunity to establish an identity beyond her marathon on the Senate floor, as evidenced by her completely botched Twitter town hall, in which she dodged every question on abortion — her campaign’s original raison d’etre — and avoided any opportunity to connect with voters on a level beyond the robotic persona that Davis seems almost to have embraced.

And the gaffes don’t stop there. Davis has hardly done herself any favors with the press. Her campaign continually ties reporters’ hands by releasing her whereabouts but then swearing them to secrecy. What good do they think can come of that? It would be strange enough if they kept her schedule a complete secret, but to tentatively go halfway by tipping off reporters seemingly on sufferance? That beggars belief. It’s as if Davis and her campaign were essentially unsure of themselves and having second thoughts, not just about this relatively minor organizational issue, but also about the larger issues undergirding her campaign. Wherever we look in her campaign, we see uncertainty and hesitation flitting about.

But Davis can still regain her momentum. It is not too late for her to stand for something substantial, because, if and when she does, Texas voters might just surprise her — especially considering the growing divide between moderates and right-wing activists within the Republican Party.