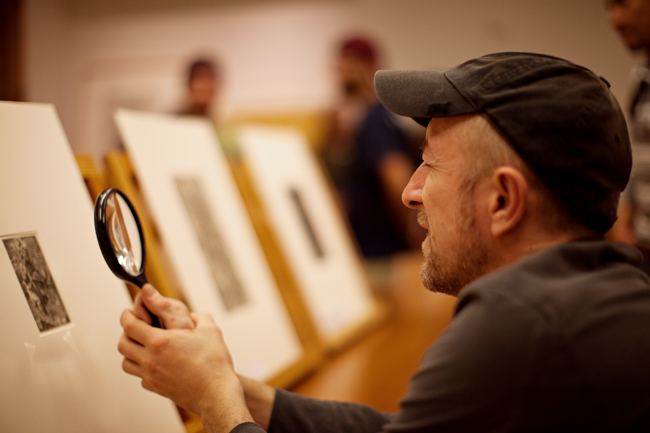 Jeff Dell examines a print at the Blanton Museum on Thursday night. The exhibit is part of PrintAustin 2014, a month-long festival in Austin that celebrates the art of printmaking. " />

Jeff Dell examines a print at the Blanton Museum on Thursday night. The exhibit is part of PrintAustin 2014, a month-long festival in Austin that celebrates the art of printmaking.

The Blanton Museum of Art held an open-house exhibit showcasing its printmaking collection Thursday night as part of a month-long print festival in Austin.

The exhibit, under the direction of print-room specialist Kristin Holder, features a collection of 23 pieces on paper ranging from the 15th century to the present. Holder said the universal subject-matter within print work might be the reason for a resurgence of interest.

The pieces drew attention from students, such as sociology junior Brooke Brockman, who heard about the exhibit through email.

“I get the event emails from UT every day, and I usually just scan through them, but this time I saw the names of Diego Rivera and Pablo Picasso, so I was intrigued and thought I would check it out,” Brockman said. “I’m definitely an art enthusiast. [Printmaking is] an activity my boyfriend and I like doing ourselves, so we enjoy exhibits. You get to come in and see some works that you may have never known existed.”

The exhibition was an early event as part of PrintAustin, a celebration of the art of printmaking within the Austin community. Co-chairs Elvia Perrin and Cathy Savage have been preparing the events since last summer.

“We started in July and have been working for the last six months,” Perrin said. “We have tons of support from volunteers, from the printmakers, all the galleries and UT. The Blanton and the Harry Ransom Center are all contributing their time and their resources to promote prints for the month.”

Savage said that although printmaking hasn’t enjoyed much attention in recent years, she and Perrin hope the event will encourage a greater appreciation for the art form.

“Austin has been a print town for a long time, except no one besides printmakers [have] known that,” Savage said. “This was our opportunity to tell Austin what a rich printmaking community is here.”

Perrin said she hopes the festival will foster a supportive community among Austin artists.

“We really just wanted to promote what we love and create an environment where local artists can make prints and sell prints in Austin, Texas,” Perrin said.