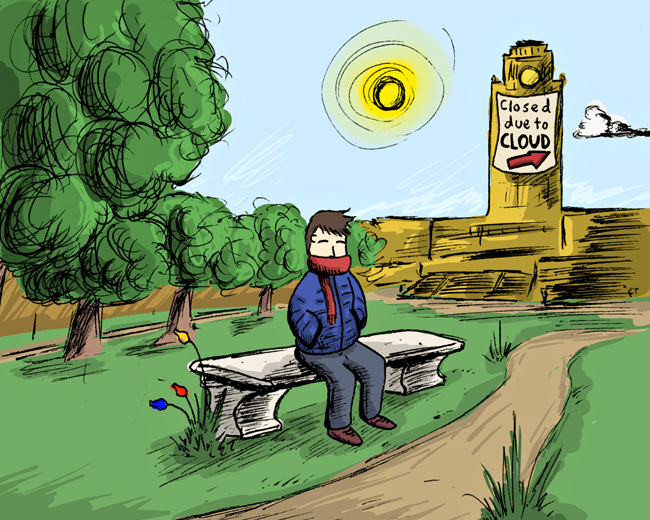 In the case of inclement weather, UT officials meet with local meteorologists to discuss conditions before making decisions about school closures, such as the decision to delay class Dec. 6.

Classes starting before 10 a.m. were canceled on Dec. 6 because of a National Weather Service advisory. By the time the University alerted students of the delay at 5 a.m., the light rain had ceased and temperatures had risen from near freezing to above 32 degrees in central Austin.

Despite the fair conditions on campus, storm reports in nearby towns, including Buda, Georgetown and Round Rock, caused University officials to delay opening the campus, according to Troy Kimmel, senior lecturer in the department of geography and the environment.

“Even though here on campus there wasn’t any ice, temporarily closing the University was what we had to do to protect our students, our faculty and our staff,” Kimmel said.

In any case of unfavorable weather conditions, Kimmel and a group of meteorologists from local TV stations, UT safety officials and representatives of other schools and agencies throughout the region meet to discuss possible courses of action.

“We had a number of storm reports from northern Travis County, including a 50-car pileup and ice conditions out on some of the highways,” Kimmel said. “So, considering the fact that we had to bring in all of the faculty, staff and students who don’t live on campus, I think we made a pretty good decision.”

Music performance junior Brenham Adams said because of the timing of the delay, one of his final exams was moved to the following Monday.

“It was an inconvenience for me, and it wasn’t even that cold,” Adams said.

“All the emergency preparedness people in the region get on a conference call,” Posey said. “They talk about what’s happening and they make their predictions based on what [National Oceanic and Atmospheric Administration] says.”

“We wait to see how all the school systems are going to react to weather because so many of our employees, of course, have to think about ‘well, if my kids are out of school,’” Posey said.

“We try to be as proactive as possible,” Kimmel said. “We deliberate, and in the course of 15-20 minutes, we have a decision made about what we’re going to do.”

Posey said the well-being of the students and employees ultimately influences decisions regarding weather-related closures.

“We don’t want to do anything that is going to jeopardize anyone in our community’s safety,” Posey said.