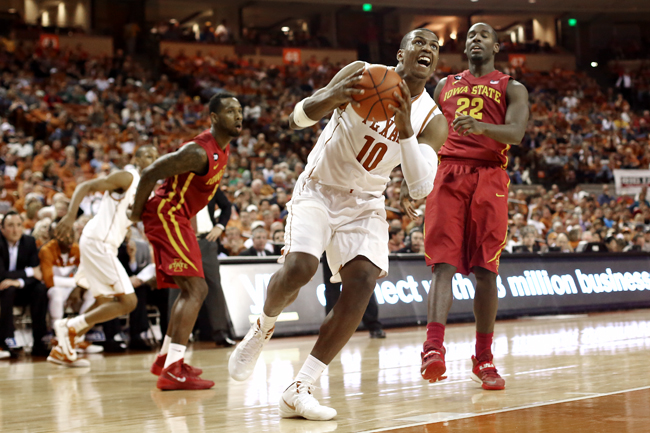 Junior Jonathan Holmes drives to the basket during Saturday's matchup against Iowa State. Holmes, Texas' only upperclassmen, recorded a career-high 23 points to lead the Longhorns' upset against the No. 9 Cyclones.

The Longhorns have not toppled a top-10 team since a win over No. 2 Kansas in 2011, which is also the last season Texas was ranked in the AP poll. On Saturday, that streak ended with a win over No. 8 Iowa State — and the unranked streak could soon follow suit.

“We want to compete with the best,” sophomore guard Javan Felix said. “And tonight was a chance for us to do that and we performed well. We feel like we’re as good as anyone when we put our best on the floor.”

The Longhorns did not make a field goal for more than five minutes during that stretch. But they endured, converting 7-for-8 free throws in the final minute to seal the game.

Jonathan Holmes, a junior and Texas’ lone upperclassman, led the way for the Longhorns. He paced the team with a career-high 23 points and added seven rebounds, each of which came in the second half. This proved to be a common theme for the team. Texas responded to a 22-12 rebounding deficit at halftime to outboard the Cyclones 25-18 in the second frame, a charge led by an energized Texas frontcourt.

“When the bigs play good inside it opens up everything for us because there is always a size advantage inside,” Felix said. “When they play hard and are getting on the boards, it’s easier to us to attack closeouts and get open shots. That’s how we try to run our offense. We didn’t do a good job of it in the first half, but in the second half it got better. I think that was the difference in the game.”

Sophomore center Cameron Ridley provided a spark for Texas in the second half after a quiet showing of only four points in the first. Ridley finished 7-for-10 from the field for 16 points and 11 rebounds, his fifth double-double of the season.

“I thought [Ridley] was just terrific today,” head coach Rick Barnes said. “It’s what he does — everyone game planning to try and keep him out of there as he’s fighting for space. I thought he was just really good.”

Ridley also single-handedly created the biggest momentum shift of the game. With Texas up 55-51, Ridley funneled toward the basket after a missed Isaiah Taylor jumper and followed the miss with a deafening two-handed slam. The dunk put the crowd on its feet, and before they could sit down Ridley sprinted down the floor and made a huge block, producing a second roar from the fans.

“After the dunk, it gave us a lot of momentum on offense and defense,” Ridley said. “It gave us the spark, got the bench and crowd into to the game. It’s the kind of stuff we need.”

Two other Longhorns finished in double-figures. Felix added 17 points, despite 5-for-17 shooting, and Taylor contributed 12.

The Longhorns forced Iowa State into 18 turnovers and held the Cyclones to only 33 percent shooting behind the arc. This was huge for Texas; Iowa State relies on the three offensively and entered the game with the best assist/turnover rate in the country. The latter statistic also proved to be defining for Texas, according to Barnes when asked about the biggest difference in the team’s play Saturday versus their 0-2 conference start.

“One stat,” Barnes said. “Today we had eight turnovers and 12 assists, whereas normally it could be the other way.”

The win gives the Longhorns three straight victories in the Big 12 and will provide momentum as they enter a stretch against three of the conference’s best: Kansas State, Baylor and Kansas. Texas plays No. 22 Kansas State on Tuesday night at the Frank Erwin Center.