What happened to Texas’ coaching staff? 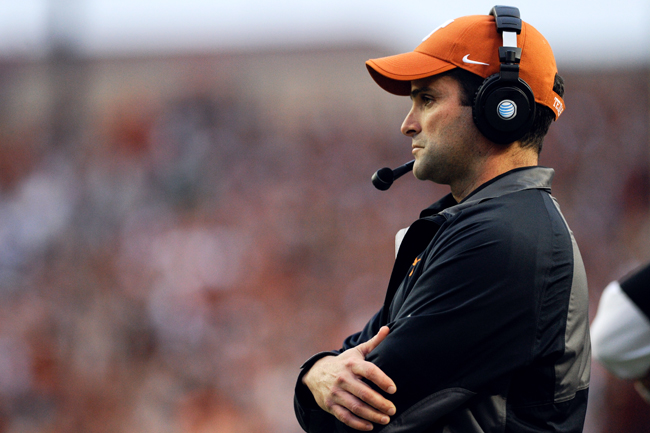 When Mack Brown announced his resignation on Dec. 14th it was clear there would be massive changes in 2014 for the entire coaching staff. New head coach Charlie Strong only retained Bruce Chambers for his first staff at Texas, meaning everyone else was forced to find somewhere else to coach or something else to do.

Since leaving the Longhorn program, Brown has stayed in the public eye via Twitter. Brown live-tweeted the BCS Title game, as well as the Broncos-Patriots AFC Title game. He recently used the platform to state that he is not interested in coaching in the NFL and looks forward to attending tailgates with Texas fans this fall.

Robinson is a finalist for the California defensive coordinator job, after he successfully revived his coaching career following Texas’ defensive turn-around in 2013. If Robinson is unable to land the job, it is unknown what and where he will be coaching in the future, and his prospects may be pretty limited despite a successful 2013 campaign.

Rumors circulated that Applewhite would rejoin Will Muschamp at the University of Florida, but that door closed before the Alamo Bowl was played. On Jan. 2, it was reported by SBNation that Applewhite had accepted a one-year severance package, but details of his future are uncertain at this point.

After being demoted following an embarrassing showing in Provo, Utah, Diaz fell off the coaching radar. So it came as a bit of a surprise when it was announced Tuesday that his next coaching job will be defensive coordinator at Louisiana Tech.

Reports on Cal’s SBNation site indicate that Akina could be bringing the “Defensive Back U” to UC-Berkley. If Akina is hired at Berkeley as defensive backs coach, it seems logical that Robinson would make the move as well.

On Jan. 7, Davis was named USC’s defensive line coach, after Strong decided to combine the line position. That stint lasted one week before he bolted to
Tuscaloosa after Texas hired Chris Rumph from Alabama. The two switched places, reuniting Davis with Nick Saban and the Crimson Tide for the foreseeable future.

After not being retained by Texas, Wyatt’s name has come up in numerous offensive coordinator searches and he is a finalist for the head coach position at Sam Houston State.

On Jan. 5, it seemed Searels was the front-runner for Florida’s offensive line job. But, just a day later, the Gators went in a different direction. With that opportunity gone, Searels is now a candidate to coach Virginia Tech’s offensive line.

Since losing his job, there is not much known about Porter’s next coaching destination.

The hiring of Rumph resulted in Giles being let go. Not many details have emerged about where he will coach next.