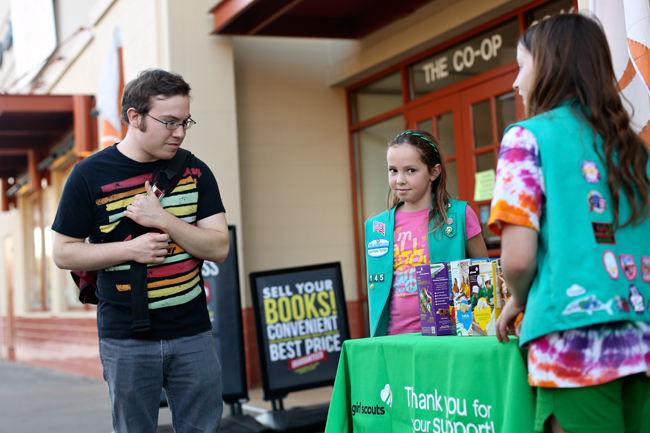 As students plunge into the throes of Thin Mint season, young girls toting boxes of cookies and bags of change seem to take over every street corner — but, in reality, the University only allows two Girl Scout cookie booths on campus.

The on-campus booths are organized by the Girl Scouts of Central Texas council, which includes smaller service units, such as Sunnyside. The booths are located on the West Mall and outside the Perry-Castaneda Library. According to Cindy Cassidy, Sunnyside’s service unit director and cookie manager, girls who sell at these two booths must be in sixth grade or older.

The University determines the locations and the dates with the Girls Scouts of Central Texas council. Service units may sell at council booths based on a lottery system.

Assistant dean of students Mary Beth Mercatoris said both nonprofit and for-profit organizations are usually restricted from coming on campus and selling items. The Girl Scouts were authorized to use the sites in a letter from Marla Martinez, associate vice president for financial and campus services.

Despite restrictions on campus, Sunnyside service unit tries to target college students in another way — by selling in West Campus. The six booth locations include the Co-op, Kerbey Lane, Wag-A-Bag and three different apartment buildings owned by The Block.

To mark the beginning of cookie season, almost 200 boxes were sold by a Sunnyside booth at the Co-op on Sunday, and more than 53,000 cases of cookies were delivered to the Austin area, according to Cassidy. Booth sales began Saturday and will continue through Feb. 21.

Hulan Swain, University Co-op corporate assistant to the president, said the business has allowed the Girl Scouts to sell in front of the store for more than 10 years.

“They’re part of our community, and our mission is to support our local community,” Swain said. “We allow them to sell in front of the Co-op because we like and respect what they stand for.”

Swain said the only problem Sunnyside has had with the location is girls from other areas selling individually within sight of the cookie booth in front of the Co-op. Currently, girls are only allowed to sell in residential areas or at their service unit’s designated booths. Sierra Fernandes, product program manager for Girl Scouts of Central Texas in Austin, said the term “residential” has not been clarified yet, so individual Girl Scouts may technically sell on Guadalupe.

“[The Co-op is] an awesome location,” Cassidy said. “The students are always friendly and buy lots of cookies.”

Sunnyside’s disadvantage to its student-centered boundaries is its lack of a shopping mall and big stores that many units have the luxury of being able to sell at.

“It’s not like we have the best place in the city,” Cassidy said. “There are other places that have great cookie sales also.”