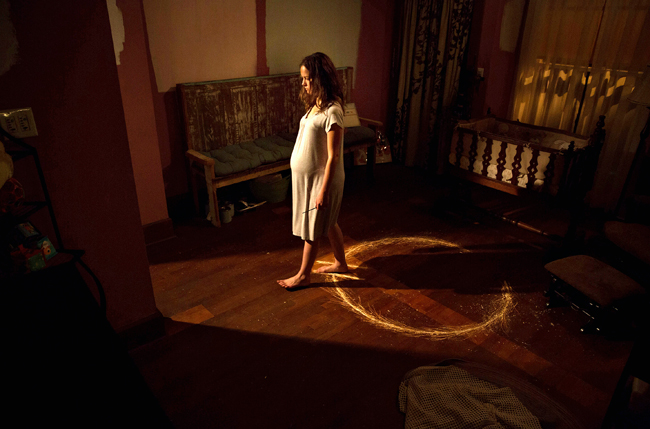 This image shows Allison Miller in a scene from "Devil's Due." " />

This image shows Allison Miller in a scene from "Devil's Due."

In any film genre, familiarity is something of a given. In action flicks, the bad guy dies in explosive fashion. Romantic comedies always end with a passionate confession, usually in public and always followed with a kiss. But some genres, especially ones such as horror that are based on the ability to surprise the audience, are constantly struggling to bring something fresh to the table, a lofty goal that only rarely succeeds.

“Devil’s Due” is neither a hit nor a miss, playing in well-established territory, but still packing in enough clever, disconcerting moments and likable characters to keep its brisk 89-minute runtime from lagging.

After an appropriately ominous opening featuring a bloodied Zach McCall (Zach Gilford) in a police interrogation room, “Devil’s Due” jumps back nine months to the eve of his wedding to Samantha (Allison Miller). After a fairy-tale ceremony, Zach and Sam go on a South-American honeymoon, the last night of which is a hazily remembered night of drinking with a strange taxi driver. A few weeks later, Samantha turns up pregnant, and, as Zach and his new bride come to terms with the terrors of starting a family, a much more satanic threat starts to emerge — from inside her uterus.

It’s rare for a horror flick to have characters likable enough for the terrors inevitably inflicted upon them to register as more than empty jump scares, but “Devil’s Due” takes its time developing its central couple. In his time on “Friday Night Lights,” Gilford mastered the art of evoking the audience’s sympathy, and he puts that skill to admirable use here as his character struggles to deal with the threat to his family. Gilford has solid chemistry with Miller, who is charmingly tender as a wounded young woman terrified about losing control of her body, but she’s unfortunately sidelined halfway through the film, relegated to demonically blank stares and agitated tones after a few great scares.

One of the more interesting aspects of “Devil’s Due” is the creative team behind it, a quartet of filmmakers dubbed “Radio Silence,” who also made the memorable final segment of horror anthology “V/H/S.” While “Devil’s Due” shares that short’s found-footage trappings, it’s never quite as nightmarish, though the quartet puts forth a valiant effort. Working with producer Chad Villella, directors Matt Bettinelli-Olpin and Tyler Gillett stage their sequences with efficiency, and cinematographer Justin Martinez makes the moments of fleeting terror linger for their unassuming composition.

Ultimately, “Devil’s Due” wouldn’t be much of anything if it wasn’t scary, and the film certainly has a knack for getting under the viewers’ skin. There are solid scares throughout, but the moments that truly stick subtly draw creepy significance from established character details. When the vegetarian Samantha lingers over the ground beef aisle in the supermarket, or causes a birthing class to go horribly wrong, it’s far more effective than the barrage of special effects that overwhelm the film’s finale. In its climax, “Devil’s Due” cranks up the scares but also removes the subtlety that made them sing to begin with, leaving viewers with an effects-driven ending that succumbs to the predictability that the film has dodged thus far.

There’s plenty to like about “Devil’s Due,” and it’s clear that the Radio Silence team has it in them to make a horror classic, but this, unfortunately, is not it. For all the dedicated character work and creeping sense of helplessness, “Devil’s Due” ends on a note with too much familiarity and not enough personality, which takes it from being a potentially solid horror effort to a mixed bag, destined to be shrugged into a DVD discount bin within a year or two.