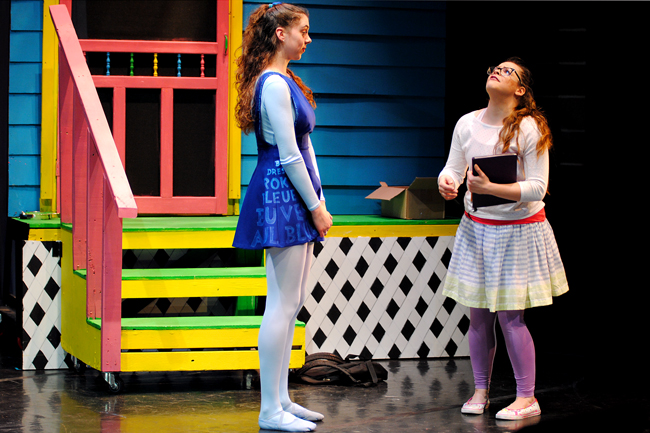 Dancer Abbey Smith and actress Chelsea Hockaday rehearse a scene from the production “Sprites” at the Long Center on Thursday afternoon. The piece merges dancing and acting to show the impact of words in bullying. " />

Dancer Abbey Smith and actress Chelsea Hockaday rehearse a scene from the production “Sprites” at the Long Center on Thursday afternoon. The piece merges dancing and acting to show the impact of words in bullying.

The production incorporates acting and ballet to tell the story of a young girl, Wren, who, after falling victim to cyberbullying, discovers the power of words. These words take on a life of their own and are abstractly represented through the movements of Ballet Austin’s dancers.

“The goal of Ballet Austin and [Pollyanna Theatre Company] has always been to create pieces that really merge the dance and the language and tell as much of the story and as much of the emotion through dance as it does dialogue,” said Judy Matetzschk-Campbell, artistic director for “Sprites.”

Rather than spontaneously breaking into dance like in a traditional musical, choreographer Nicholas Kepley chose to incorporate ballet moves that flow and blend into the plot.

“I have tried to make it feel youthful and contemporary, but, at the same time, I’ve wanted to honor and showcase the dancers’ strengths,” Kepley said. “These are ballet dancers, so they haven’t all necessarily had jazz before or modern. I wanted to draw from their strengths, but also push them in a little more contemporary direction.”

For many, the added movement in “Sprites,” combined with theater’s dialogue, makes the plot more understandable.

“Both art forms are very powerful storytellers,” Matetzschk-Campbell said. “Dance and movement, as well as traditional theater, bring a story to life, and some — children especially — really identify with those characters in a strong, different way than if they were just hearing the words. Seeing the conflict and seeing the impact of the words brought to life in movement really speaks to them very strongly.”

Since “Sprites” addresses childhood bullying, actress Julie Linnard, who plays the bully, drew character inspiration from the children she regularly works with outside of dance. She noticed the issue among many children, but one case stood out among the rest.

“I work with a particular boy who has learning disabilities that set him apart from everybody,” Linnard said. “And he takes things very hard; even if it’s just a simple frustration from someone, it blows his mind and the world ends.”

For the dancers, character development was more difficult. Ballet dancers are trained to be more stoic than actors, so expressing emotion throughout the show was a new challenge for them.

“It’s really cool talking to some of the dancers that are in this production because they’re not used to things like this,” Linnard said. “In ballet, you don’t have to be so expressive facially. It’s all in your body, and the music just kind of guides your performance.”

By combining the two mediums of art in “Sprites,” the dancers and actors have had the opportunity to observe each other and appreciate their fellow performers in a way they would not have been able to otherwise.