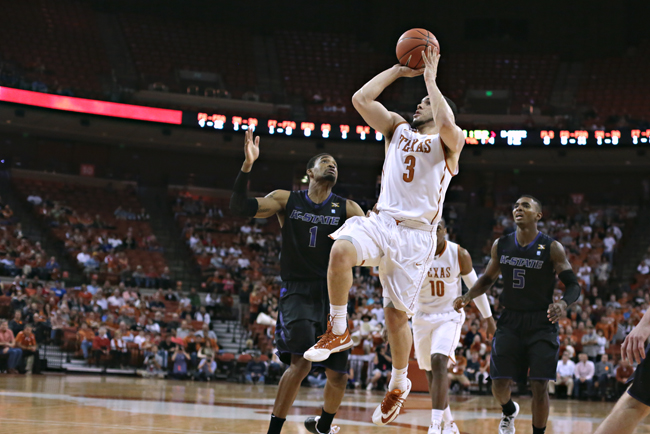 With Cameron Ridley emerging as a go-to player, sophomore Javan Felix has quietly been a key player for the Longhorns. Felix is second on the team in scoring this season, averaging 12.5 points per contest.

As if a chance to extend its four-game win streak wasn’t enough incentive, Texas (15-4, 4-2 Big 12) has an opportunity to make history in Waco this Saturday.

After knocking off No. 8 Iowa State and No. 22 Kansas State in their last two games, the Longhorns could defeat three consecutive AP Top-25 teams for the first time in school history when they travel to face No. 24 Baylor (13-5, 1-4 Big 12) this weekend.

“We feel like we can beat anybody and play with anybody,” sophomore point guard Javan Felix said. “We feel that way because we’re prepared. We work very hard during the week, in practice, in film sessions, going over scouting reports. … We just try really hard at everything.”

The biggest reason for  Texas’ recent conference success has been its dominance in the paint, particularly the play of sophomore center Cameron Ridley.

Ridley, who struggled miserably as a highly touted freshman, has found his rhythm in his second year at the collegiate level. The big man has demonstrated great hands and an increased awareness on the offensive end while showcasing much improved off-ball defense, resulting in more block opportunities.

Over the last three games, Ridley, who was ranked eighth in his recruiting class by ESPN, is averaging 15.3 points, 9.7 rebounds and 3.3 blocks per game. He’s also shooting 71 percent from the field and 67 percent from the free-throw line over that stretch. Compare that to his mere 46 percent field goal shooting and 33 percent average from the line last year, and it is clear just how far Ridley has come.

“I am feeling good about the way I am playing right now,” Ridley said. “There are areas I can get better in, but, offensively, I am very confident. Even if I get fouled, I know I am going to go to the free-throw line and make my free throws.”

Ridley and the rest of Texas’ post presence will have their hands full this weekend against Bears center Isaiah Austin. Austin, who played alongside Ridley at the 2012 McDonald’s All-American game, stands at 7-foot-1-inch and is one of the most athletic big men in the country.

If they can limit Austin inside and slow down the pace of Baylor’s run-and-gun offensive attack, the Longhorns should be able pull off another upset. And, given their current third place standing and proven ability to beat some of the Big 12’s top teams, a win would bolster their slim conference title hopes.

“Right now, we have put ourselves in a position to control our own destiny,” junior forward Jonathan Holmes said. “We are taking it one game at a time, and we are playing a good Baylor team this Saturday, so that’s what our focus is on right now.”