After a tour with Quiet Company, Cody Ackors returns to UT with a new direction 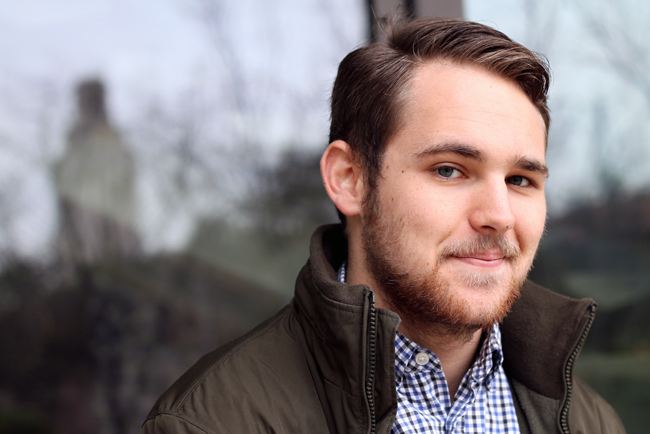 After touring with his band, Quiet Company, Cody Ackors returned to UT last fall and is a fine arts major. He plans on applying to the Moody College of Communication this spring. " />

After touring with his band, Quiet Company, Cody Ackors returned to UT last fall and is a fine arts major. He plans on applying to the Moody College of Communication this spring.

For many musicians, touring the country, performing for devout fans and sleeping on strangers’ floors is essentially “living the dream.” For musician and music performance junior Cody Ackors, that dream has changed direction.

In August 2012, Ackors withdrew from UT to pursue music full time as the trombonist of Austin-based Quiet Company. This semester, Ackors returned after reapplying to UT last fall. While he is still a fine arts junior, he plans to pursue advertising and apply for transfer to the Moody College of Communication this spring.

“Design has always been a really huge part of my life,“ Ackors said. “Trying to just figure out the way to make something look the way it is in your head is really appealing.”

Ackors said he first noticed a bridge between his hobby and his future while traveling the country with his band and working with music marketing and advertising agencies.

“I got to see a ton of places, and I think I got a little more perspective on what I actually want to do,” Ackors said. “I saw a very visible line [suggesting], ‘You should maybe think about advertising. You like design. You like creativity and its real-world, economical application.’”

Ackors joined Quiet Company during his senior year of high school. After his freshman year at Baylor University, he transferred to the Butler School of Music to be closer to the band. While he felt he gave his full effort to the school in practice, Ackors said he did not feel the same effort in culture, which helped justify his decision to withdraw.

“That kind of made sense when I had the opportunity to leave and tour and make that my job,” Ackors said. “I said to myself, ‘You’re not going to have that opportunity again. You’re not guaranteed it.’ It just felt like the right thing to do.”

While on tour, time between shows gave Ackors time to explore his interest in design on his laptop. He worked with local photographer Julie Cope to create mock show posters, which allowed him to test his visual style. His work includes the artwork for Quiet Company’s fifth album A Dead Man On My Back: Shine Honesty Revisited.

“He showed me where he wanted to go with the photographs he had taken [for the cover], and I sort of helped him [improve] his design,” Cope said. “It’s rare, the kind of tenacity that he has.”

Dorothy Irvine, Ackors’ girlfriend and student at the University of North Texas, said she remembered his enthusiasm for the field after the band’s performance at Austin ad agency GSD&M. The show gave Ackors the opportunity to collaborate with designers at GSD&M and make his own poster for Quiet Company.

“I remember him going and telling me afterward, saying it was so cool,” Irvine said. “He had talked to some of the head designers there and he just fell in love with it.”

After spending more than four years playing with Quiet Company, Ackors made the decision to leave the band to stay in Austin and go to school full time. Ackors said it was difficult telling his band mates he was leaving, but that their response was positive, telling him they thought it was the right thing from him to do.

Though Irvine expressed excitement for Ackors’ opportunity, she said his readjustment to student life was difficult. In addition to Ackors being at home in Austin permanently, he also had to find a job and move into an apartment closer to campus, all before the semester started.

“All these things that were miniscule while you’re on the road now become a pretty big deal,” Irvine said. “When he came back to school, his parents helped him a little bit, but he had already made that step out of childhood in his parents’ eyes [when he left school to tour], so he had to set everything up.”

Although Ackors is not with any act specifically, he continues to play music on the side for different groups around town.

“I just can’t tour,” Ackors said. “If Quiet Company gave me a call and wanted me to play a show, I’d absolutely do it. … I just needed to stay in Austin. I’m still doing all the music stuff I was doing while I was in Quiet Company, just not with [them].”

While touring taught him the difficulties of the music business, Ackors said it was some of the most fun he’s had, and expressed a similar humorous sentiment about his solo career as a student.

“[Going back to school] really didn’t have anything to do with Quiet Company. It had more to do with me picturing the next 10 years of my life and what I wanted it to look like,” Ackors said. “It’s a little weird not having every day revolve around the same five people. … I’m spending a lot of time bouncing ideas off my own head, and I seem to think they’re all very good.”