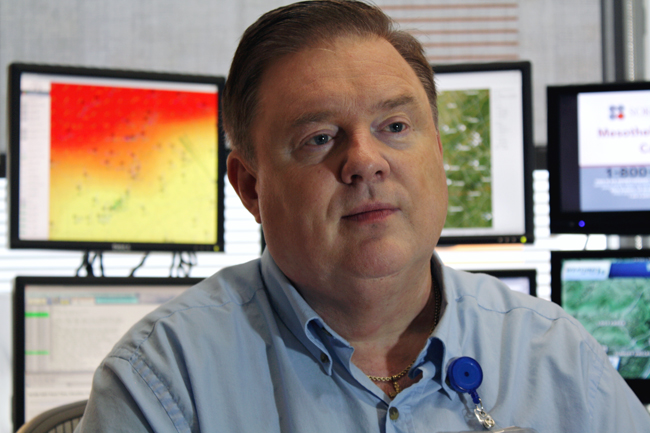 Troy Kimmel, UT’s incident meteorologist is also a senior lecturer in the department of geography and the environment. Kimmel began his career in broadcast meteorology in 1978.  " />

Troy Kimmel, UT’s incident meteorologist is also a senior lecturer in the department of geography and the environment. Kimmel began his career in broadcast meteorology in 1978.

As a child, Troy Kimmel cowered at the sound of thunder. Now, according to colleagues in his field, he is one of Texas’s most admired meteorologists.

The man with the self-described “longest title on campus” is UT’s incident meteorologist under the Office of Campus Safety and Security and a senior lecturer in the department of geography and the environment.

Kimmel said when he first started working at the University, he did not expect he would stay for more than two decades.

“I was brought on as faculty in the department of geography in the fall of 1988 and was told it was a one-semester commitment,” Kimmel said. “That was almost 26 years ago.”

“When they want to know something, they call [me],” Kimmel said. “I’m here to help them.”

When Longhorn game days roll around, Kimmel works with officials from UTPD, the FBI and the Federal Bureau of Alcohol, Tobacco, Firearms and Explosives to ensure everyone in the stadium is safe.

“My concerns are lightning, thunderstorms and severe weather,” Kimmel said. “We come up with scenarios and say, ‘How would we work this? What would happen if this happened?’ We try to be as proactive as we can because, in this business, you don’t want to be reactive.”

Kimmel began his career in broadcast meteorology in 1978. Since then, he has worked for several local TV stations, including KVUE, Fox 7 and KEYE TV.

“I have been at every TV station on the face of the earth in Austin,” Kimmel said. “I’ve been doing radio stuff for a long time too.”

“I think the [TV] business has sort of changed, and it kind of changed in a way that I wasn’t as comfortable with as I had been in the past,” Kimmel said. “In radio, you have to tell a story, and you only have one opportunity to do it. You have to be able to do it verbally. That’s what I like about it.”

Kimmel teaches both an introductory class entitled Weather and Climate and an upper-division class called Severe and Unusual Weather. One of Kimmel’s students, architecture sophomore Clayton Cain, said Kimmel’s experience enhances the quality of his lectures.

“It’s so cool to have a professor with a background like his,” Cain said.

When asked about his hobbies, Kimmel laughed and said the time-consuming nature of his responsibilities leaves him little free time.

If Kimmel is not busy teaching, advising committees or forecasting the weather, he is collecting airline memorabilia. He owns cabinets full of aircraft models and even a beverage cart or two he bought off of an airline.

Kimmel, a self-described “airline hoarder,” said the history of U.S. airlines interests him the most.

“In 2014, relative to the past, we have few airlines,” Kimmel said. “We have a lot of mergers going on, so the history of those airlines are kind of getting tied up in the mergers. … That history, to me, is fascinating, and to be able to own some of that history … I really enjoy that.”

Kimmel has colleagues and friends throughout the region, including Kevin Kloesel, an associate dean and professor in the College of Atmospheric and Geographic Sciences at the University of Oklahoma.

“[Kimmel] and I began going to the same kinds of education meetings, and we’ve been doing that for about 20 years,” Kloesel said. “I really admire what he’s done for Austin in his work over the last multiple decades.”