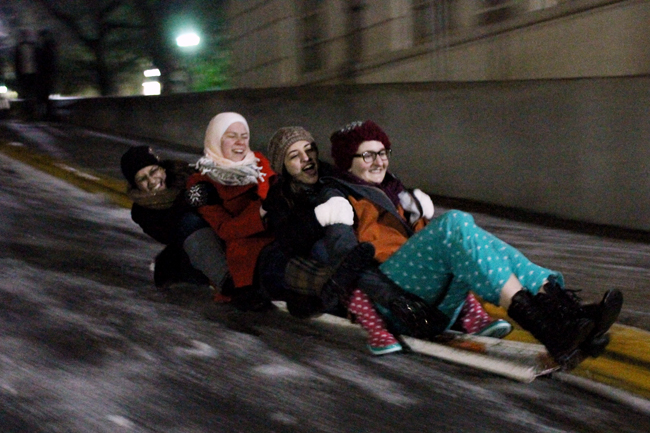 This weekend’s frozen roadways caused more than a traffic jam for many people, resulting in 278 crash-related incidents between 6 p.m. Thursday and 10 a.m. Friday, according to Austin police chief Art Acevedo.

Sleet began to fall around 5:30 p.m. on Thursday in Austin, coating the city with a thin layer of ice. By midnight, both UT and Austin Independent School District announced there would be no classes Friday.

Troy Kimmel, chief meteorologist for the UT campus safety and security committee, said the UT community was prepared for the ice storm well in advance.

“On Tuesday, I called vice president [Gerald] Harkins and said, ‘We may have a problem Thursday night,‘” Kimmel said. “We maintain a weather email list on campus, and I started cranking things out.”

In preparation for the storm, Texas Department of Transportation crews started spraying area roadways with a deicing treatment Wednesday afternoon. By midday Friday, the crews had sprayed 2,500 gallons of liquid deicer and dropped 250 tons of granular deicer on Central Texas roads, according to TxDOT spokeswoman Kelli Reyna.

According to Capt. Josh Portie, the Austin Fire Department responded to approximately 36 vehicle collisions between Thursday evening and Saturday morning.

“Based on what was projected, the weather wasn’t anything that our normal operations couldn’t manage or handle, and they were able to,” Portie said.

Although some vehicular wrecks resulted in multiple injuries, no weather-related fatalities were reported,

During emergency situations, the Travis County Emergency Operations Center is the command center for all Austin-area response agencies.

“When the Emergency Operations Center is activated, our people on the fire trucks can actually help keep TxDOT updated on what’s going on with the roadways, even without them having the resources out there,” Portie said.

In addition to affecting the roads, the weather posed difficulties for flights.

Austin-Bergstrom International Airport, which averages about 280 flights each day, reported more than 60 flight cancellations between Thursday evening and Friday afternoon. This had a minor effect on normal operations, according to Jason Zielinski, public information specialist for the city’s aviation department.

“That’s still significant, especially for those whose flights were canceled — but, in the big picture, 60 of 560 isn’t a whole lot,” Zielinski said.

Zielinski said, when flights scheduled to arrive Thursday evening were canceled, the lack of available departure planes on Friday resulted in more cancellations.

“Since we had so many arrivals canceled Thursday night, instead of having about 45 planes spending the night, we only had about 15,” Zielinski said.