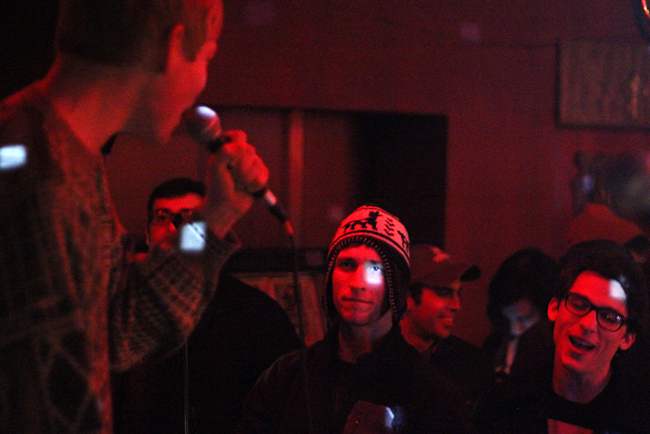 For die-hard fans of indie rock and punk, there aren’t many opportunities to belt out alternative classics by bands such as Minor Threat or Belle & Sebastian at karaoke nights around town. For an alternative to the top-40 hits that dominate most karaoke bars, there is Karaoke Underground, an Austin institution hosted by Kaleb Asplund and his wife Hannah Ford.

Founded in 2004 by Asplund when he and Ford moved to Austin, Karaoke Underground was inspired by a similar punk-rock karaoke in Minneapolis and the couple’s time abroad in Japan. Asplund, who spent his college years as a music director of a student-run radio station that didn’t keep up with pop music, used karaoke as a means to socialize with other English speakers while in Japan.

“I didn’t know what ABBA sounded like,” Asplund said. “I kind of knew Bon Jovi, but I didn’t know the songs that well. It’s really fun and exciting to learn this stuff that I had been missing and share that with everybody.”

The couple started doing Karaoke Underground events at private parties, slowly expanding to public events. They put up flyers, but mostly it was friends and word of mouth that brought people to their events in the early years.

They used this mentality to play plenty of different shows around the city, including a couple of rooftop shows at the old Factory People store on South Congress, a benefit at Scoot Inn, Austin City Limits Music Festival and Fun Fun Fun Fest aftershows.

Asplund has taken Karaoke Underground outside of Austin a few times, playing in Denton and his hometown of Madison, Wis., as well as tours of the Northeast and Midwest. The biggest crowd they ever drew was at the Matador 21 festival in 2010, where artists including Pavement, Sonic Youth and Belle & Sebastian played. In Austin, they have done residencies at clubs such as Hole In the Wall, Headhunters and Dive, but the only time and place to regularly catch the program is the first Saturday of every month at Nomad, where it has been for about five and a half years now.

“Nomad had just opened at that point,” Asplund said. “I think they thought we were Karaoke Apocalypse, who have a live band and are really good friends of ours, but Nomad booked us. We did the show, and it was a great turnout, and we’ve been doing the first Saturdays there ever since then.”

Karaoke Underground has also hosted events at Spiderhouse Ballrooom, where it often partners up with Pop Quiz, a group that puts on trivia nights around Austin.

“There is no place in the world like Karaoke Underground,” said Dylan Garsee, who runs Pop Quiz. “I hate doing karaoke at other bars because if you’re not doing Bon Jovi, no one cares. Everyone that goes to [Karaoke Underground] is super into it no matter if you’re doing Bonnie ‘Prince’ Billy or Scratch Acid.”

Asplund adds new songs to the list as often as he gets a chance and is trying to fill out a request queue of more than 800 songs. He describes the list as one-third indie-rock staples, one-third his personal preferences and one-third requests.

“Personally, one of the most rewarding things of Karaoke Underground is when people come up and tell me, ‘Hey, here’s a new band, check them out,’” Asplund said.

Asplund’s aim is to create an inclusive karaoke night for fans of underground rock and punk.