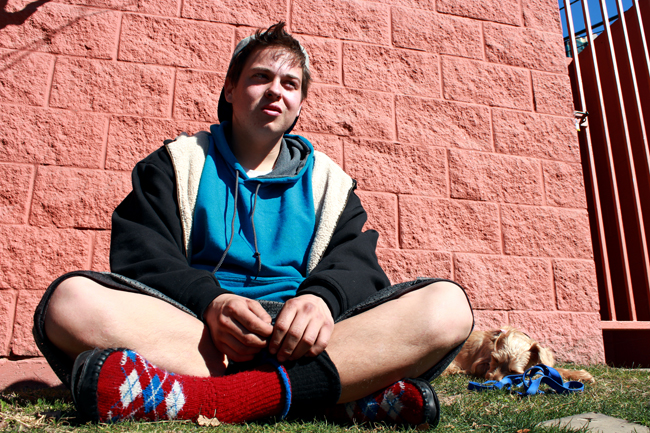 Transient Daylan Taylor has lived near Guadalupe Street for the past eight months. The Ending Community Homelessness Coalition conducted a count of homeless people in Austin this weekend and with this data they hope to raise awareness to meet transient needs. " />

Transient Daylan Taylor has lived near Guadalupe Street for the past eight months. The Ending Community Homelessness Coalition conducted a count of homeless people in Austin this weekend and with this data they hope to raise awareness to meet transient needs.

As unusually cold weather hit Austin this weekend and forced the University and most city offices to close down, volunteers drove throughout Austin to find and count homeless people for an annual census.

The Ending Community Homeless Coalition, a nonprofit organization, conducted its annual count of sheltered and unsheltered transients in Austin on Friday and Saturday. The coalition provides resources to homeless and at-risk populations and collects and redistributes data on homeless populations.

“Good decisions in the 21st century make use of good data,” Howard said. “We must understand the needs of the people in order to provide the correct intervention that will promote housing stability.”

Transient Sherry Jones has resided in the vicinity of Guadalupe for approximately a year. Jones said there are limited resources for homeless people during cold weather.

Jones said for the past two nights, she stayed with her husband Mike and three other people outside of a church near campus. She said because she and her husband are not legally married, getting shelter together is difficult.

Howard said the recent cold weather may influence data collected in this year’s count. She said because more people may take advantage of cold weather shelters, fewer homeless may be counted as unsheltered and more may be counted as sheltered. Howard said the greatest barriers for homeless or at-risk populations getting the resources they need is access to affordable housing and jobs suitable for persons who struggle with addictions or mental illness.

“[Chronically homeless people] face many barriers to housing, like poor credit and rent history, low or no income and mental illness that makes relationships with landlords and neighbors difficult,” Howard said. “So, when they see teams of folks walking the streets in January, they recognize them as count volunteers and often cooperate.”

Jones said her godfather is helping her apply for government disability benefits and housing, which she said she will receive in February. She said her godfather’s friend helps her attend prenatal appointments and receive medication for bipolar disorder.

Laurent Gandy is co-chair of Hunger and Homelessness Outreach, a student organization that volunteers with homeless populations near campus. Gandy said data collected by ECHO may be helpful to increase awareness of the needs of transients and influence their volunteering and voting decisions.

“I think it might be helpful to get the number [of Austin transients] to the public because I don’t think people necessarily realize how many people are homeless,” Gandy said. “It may increase their involvement in volunteering and voting.”