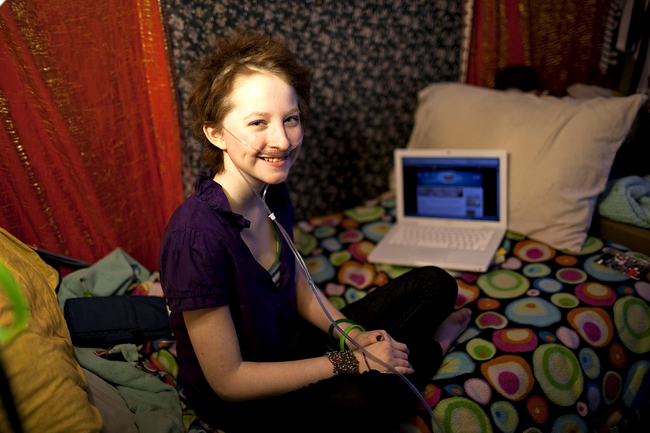 Esther Earl is the girl many think inspired the main character in John Green’s award-winning novel “The Fault in Our Stars.” Her life as a teenage girl who battled thyroid cancer is now memorialized in “This Star Won’t go Out.”  " />

Photo courtesy of Yoon S. Byun for The Boston Globe.

Esther Earl is the girl many think inspired the main character in John Green’s award-winning novel “The Fault in Our Stars.” Her life as a teenage girl who battled thyroid cancer is now memorialized in “This Star Won’t go Out.”

On Thanksgiving Day 2009, 12-year-old Esther Earl was diagnosed with thyroid cancer after experiencing abnormal chest pain and fatigue. Today, her short but powerful story is a 400-plus page manifestation of the fullness even the shortest lives can have.

“This Star Won’t Go Out” chronicles the life of Earl, whom many believe was the inspiration for John Green’s best selling novel “The Fault in Our Stars.” The book starts out with an introduction by Green, Earl’s favorite author and close friend. While he claims that his novel is only dedicated to Earl — not based on her — there are many similarities between the two, including that they both use an oxygen tank, have pixie haircuts, thyroid cancer and a deep love for literature.

Speculation aside, the book is not about Green, “The Fault in Our Stars” or even cancer. It’s about Earl.

The novel is Earl’s posthumously published work made up of a compilation of her journal entries, message-board conversations and drawings. In addition to her own work, there is input from friends, family and Earl’s parents, Lori and Wayne, who were the main force behind compiling her writings and getting them published.

Earl’s passion for storytelling grew at a young age, and, accordingly, she spent a lot of her time in her early childhood reading and writing diary entries and stories.

From the beginning, her voice is loud and clearly spoken. The book opens with a quote from Earl: “This is a story about a girl that went through this life changing experience known as Thyroid Cancer. It’s not one of those dramatic ‘based on a true story’ cancer things … It’s a story about me, Esther Earl, having a sickness that’s pretty scary.”

Although Earl, who would be turning 20 this year, died in 2010, this publication ensures her presence among literature. Her parents also created the nonprofit “This Star Won’t Go Out” in dedication of Earl to raise money for families in need.

The book goes through the timeline of Earl’s life before, during and after cancer. It tracks her childhood and the family while they lived in various cities where Earl first discovered she had fluid in her lungs and thyroid cancer, which is rare among the young. From there, the dates on Earl’s journal entries, messages to family and friends and photos guide the story along.

Included among Earl’s writings are pieces by her closest friends and their conversations together as a part of a collaborative group called Catitude. Catitude was created by Earl and her friends as a “nerdfighter” group, which are fans of John and Hank Green’s vlog series and who support all things nerd-tastic. The messages show the group connecting on nonserious topics, such as Harry Potter and games. But they also expose the love and support they have toward one another on more serious topics through the time Earl revealed her disease to them. Although Catitude members lived all across the U.S., they gathered for the first time in real life for Earl’s Make-A-Wish request.

Unlike many people we read about who have passed away who leave many unanswered questions, Earl’s journal entries open her mind as a free place to peek and prod. Her deepest passions and thoughts are revealed through the text, and the reader can see her handwriting, scribbles and doodles as even more proof that she lived. From her prayers to God to her teenage hopes of having her first kiss, Earl is not an idea of a person wrapped up in a disease; she is relatable, full and real. In many parts of the book you lose sight of the illness completely and understand that this book really isn’t a story about cancer, it’s about life with all the sickness and messiness and friendship in between.