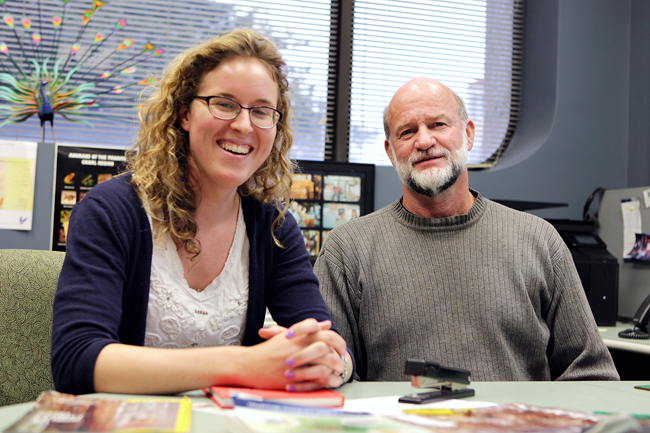 The calls the tungara frog uses to attract a mate sound like dinner bells to bats, according to UT researchers.

Male tungara frogs, a species native to Central and South America, use mating calls that create ripples in the ponds they are sitting in, while also attracting predators, according to researchers from UT, the Smithsonian Tropical Research Institute, Leiden University and Salisbury University.

“The more syllables the frogs use, the more attractive they are to females,” Ryan said.

Ryan said using more syllables makes it easier for bats to detect the frogs in a sonar-like process called echolocation.

“Bats are able to locate the frogs by locating the [sound waves] and going straight to the center of the ripple,” Ryan said.

According to Ryan, frogs are immediately able to see the danger their calls have caused, but the damage has already been done.

“The frogs are able to see the bats from their silhouette in the water, but they can’t make their ripples come back,” Ryan said.

According to Ryan, male tungara frogs are not the only species that use ostentatious practices to attract mates at the possible expense of their lives. Ryan said peahen, or female peacocks, prefer peacocks with elaborate feathers even though the plumage makes it difficult for peacocks to hide and escape from predators.

Patricia Jones, another co-author of the study and an ecology, evolution, and behavior graduate student, said the research is an example of how evolution affects animal communication.

Brian Wilkey, a human development and family sciences graduate student who studies relationships within an evolutionary framework, offered a comparison between the behavior of the tungara frog and human-mating practices.

“The selection pressures that created this long-enduring mating call [for tungara frogs] must be so successful that it outweighs the cost of dying,” Wilkey said. “In a human context, the closest comparison I can think of is when people show strength or daringness, which, in theory, will attract a mate but by doing so puts them in danger.”

Jones said this research also gives insight into the world around us.

“Humans have long asked questions about why animals behave the way that they do,” Jones said. “This study is just one small piece in the puzzle toward understanding the world that we live in.”