Transportation woes on the Drag will require a combination of solutions 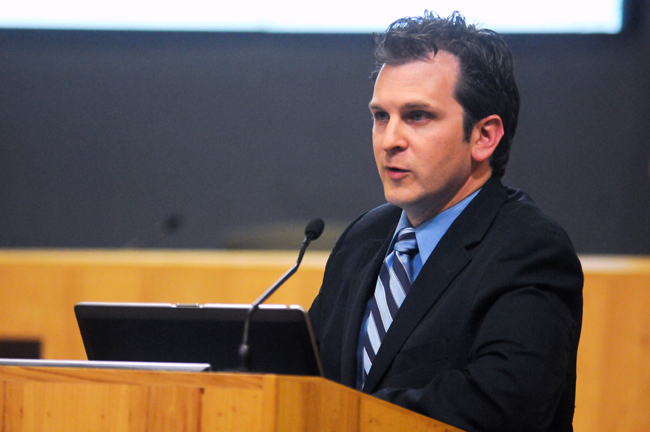 Larry Schooler, Community Engagement Consultant for the City of Austin, speaks at a staff council meeting on Tuesday evening, which included input from the community to help with transportation problems throughout Austin.  " />

Larry Schooler, Community Engagement Consultant for the City of Austin, speaks at a staff council meeting on Tuesday evening, which included input from the community to help with transportation problems throughout Austin.

Editor’s Note: This is the second installment in a two-part series on transportation issues that Longhorns should pay attention to this semester. Read the first installment here.

On Sunday, Capital Metro launched its new MetroRapid service on the Drag. Featuring green-light priority technology that will reduce the time spent idling at red lights as well as free Wi-Fi on board, local leaders hope that the changes mean bus riders will be able to get where they’re going more quickly and more comfortably.

However, all that convenience doesn’t come cheap: Bus fare on the new service rose to $1.50, from the former $1.00 of the non-express buses, though students can still ride free with a swipe of their ID cards.

A cheaper local route, the new Route 1 Metric/South Congress, will be avilable, but it will face competition from the new MetroRapid 801.

Another issue that should give students pause: Part of the reason Project Connect, the Capital Area Metropolitan Planning Organization’s regional planning initiative, passed over the Drag was that Cap Metro had already taken money from the federal government to build MetroRapid along that route.

The Federal Transit Administration, which helps fund public transportation projects across the country, chipped in $38.1 million, or roughly 80 percent, of the service’s $47.6 million price tag. However, dumping that plan so close to completion in favor of a completely different approach — a rail line — for the Lamar/Guadalupe corridor, which a Project Connect study ranked third in terms of need for transportation improvements, would have angered or, at the very least, perplexed federal officials.

Gross admitted the Guadalupe/Lamar corridor will need additional improvements in the future, but Kyle Keahey, Project Connect's urban rail lead, added, “The Lamar/Guadalupe corridor doesn’t currently have the traffic needed to support steel wheels [urban rail].” In other words, the Drag is set on the transportation front. Project Connect isn’t hanging its hat up yet, though. According to Keahey, the team will review service along key corridors every five years to ensure current needs are being met.

We welcome this continued attention, but it seems strange that the city wants to place a rail line along such a lightly traveled route rather than the high-traffic Drag.

As long as UT exists, demand along the Drag will remain constant. So how did the Lamar/Guadalupe corridor finish third in Project Connect’s ranking of corridors? According to Jace Deloney, a founder and executive committee member of Austinites for Urban Rail Action, the surprising result can be attributed to three factors that he says skewed the results: 1) the exclusion of West Campus from the corridor, 2) the overweighting of percentage growth (rather than absolute density) and 3) the modeling used to project future growth.

But, Deloney cautioned, Project Connect assumed that these pieces of land would be built on, even if they didn’t have such a guarantee from a developer.

“These figures are aspirational, not predictions,” Deloney said. “They’re not tied to reality.”

Clearly, the Drag and the western edge of campus form a high-density and busy area that already struggles to serves the needs of students to move from one area to another, and although we are glad the corridor is not being ignored, we still stand by our support for attention to demand where it exists today.

The Drag’s issues will not be solved by any single route — bus or rail — so stopping at either one is just a Band-Aid on the growing problem. Though FTA funding was only part of the reason urban rail failed on the Drag, the use of MetroRapid to the near-term exclusion of rail misses the fundamental fact that both may be needed to solve Austin’s traffic troubles. To get ahead of the increasing need for transportation to and from campus, we need to consider several projects, even if they overlap. We don’t have to just accept that the traffic issue is too big to solve.