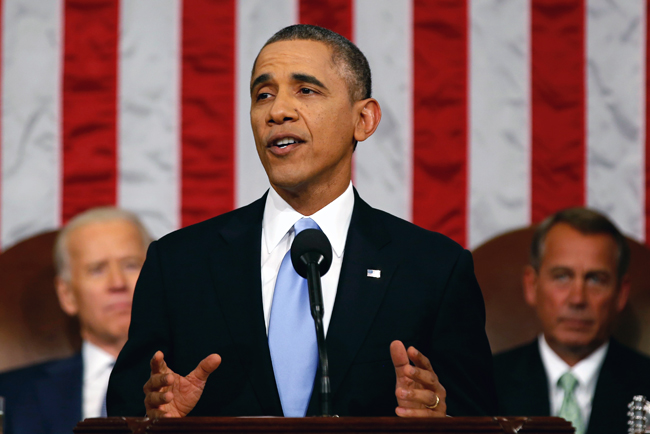 President Barack Obama promised to work to increase equality with or without congressional help in his State of the Union address Tuesday night.

“Federally funded research helped lead to the ideas and inventions behind Google and smartphones,” Obama said. “That’s why Congress should undo the damage done by last year’s cuts to basic research.”

“He wanted to make the case that he is working to increase equality and help those who have been left out in the gains made in the last few years,” Suri said. “That includes women, that includes immigrants.”

The speech follows Obama’s announcement of an executive order raising the federal minimum wage for government contract workers from $7.25 to $10.10.

Government professor Bruce Buchanan said Obama may use his power of executive order if he is unable to successfully pass bills through Congress.

“I think that he’s making [the executive order] because it’s part of his general sense that there needs to be opportunity for those on the low end of the spectrum and also because it’s going to be kind of a centerpiece of his new strategy of using executive orders since Congress is unresponsive to his request for legislation,” Buchanan said.

Sam Richardson, public affairs assistant professor, said he thinks Obama’s speech was unlike many of his other speeches.

“My sense of the speech was that it was [a] less providing sort of a grand vision like Obama sometimes does with his speeches,” Richardson said. “It was fairly short on specifics on what he was hoping Congress would do, and I think that was because he realizes that he does not have the support of Congress to push through that agenda.”

“I was expecting that [the Affordable Care Act] would be a little more prominent than it was,” Richardson said. “I was surprised that he didn’t acknowledge or apologize for the botched rollout of the website.”

Richardson said users of the website still encounter issues and people who tried to sign up for coverage may not be insured.

“I think he’s walking a fine line — he wants Americans to believe that he will protect their privacy,” Suri said. “At the same time, he wants to preserve the ability of these agencies to do their job.”

Suri said Obama implied he will go around Congress if he has to in order to increase equality for groups.

“He’s implying to his opponents that those at the top have done really well,” Suri said. “I do think that his clear and direct appeal to women is very important, and he did it on the basis of economic equality and on the argument that women need more voice in politics.”