End of Austin questions the future through perspective 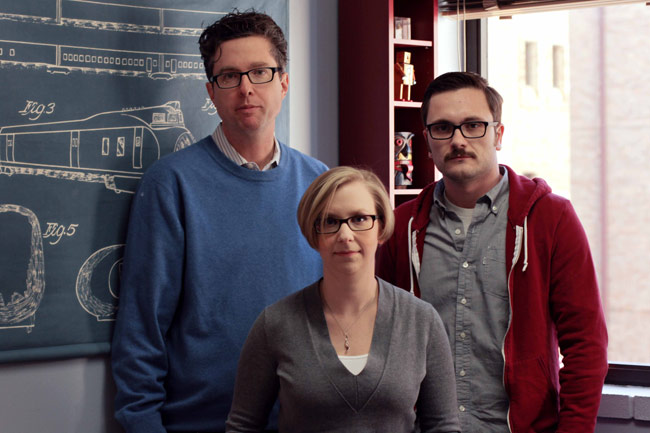 Through Austin’s endless traffic, bustling nightlife and growing population, one group is attempting to catalogue the rapid evolution of America’s fastest growing city. The End of Austin, known as TEOA, is an online journal, started by American studies professors and graduate students in fall 2011. The journal features different works of art and writing pertaining to Austin in some way.

“We wanted to have a group project that would live beyond the course,” Lewis said. “People seemed to like it so we thought, ‘What if we turned it into sort of a regular publication?’”

The project did just that. After two years, the journal continues to come out every six months and involves collaboration from students, professors and Austinites alike. Some of those who were involved in End of Austin’s first publication are still contributing today.

Two key members of TEOA’s editorial board, Carrie Andersen and Sean Cashbaugh, both doctoral candidates in the American studies program, contribute to the publication with works of their own and by scouting other possible contributors.

“If people are doing interesting things around the UT campus or around town, we reach out to them,” Andersen said.

Lewis said he looks for the flow of each piece with the next in every publication.

“I often really enjoy just seeing one [piece] next to another,” Lewis said. “I like the collage effect. I think we try to look for a balance of perspectives, we probably thought originally we’d have more people writing for us who were lamenting Austin’s changes, but so many people have only been in Austin for a
short period.”

According to Andersen, TEOA is broadening its search for perspectives, particularly in the field of science.

TEOA includes different works ranging from editorials on the change in Austin, obituaries on dead shopping malls and storytelling through photography. The pieces, although put together by different people, follow a familiar theme and message.

“I think a lot of people have very similar concerns on where the city’s going,” Andersen said. “It’s sort of a natural thematic thrust that develops.”

People creating the different works in the publication are concerned with things such as sprawl, traffic and the gentrification of Austin.

TEOA has not gone unnoticed. The publication currently has 35,000 hits on the site and that number continues to grow.

“People are responding,” Cashbaugh said. “Part of the interesting thing is putting something out there and seeing what happens to it.”

Steven Hoelscher, an American studies professor, has even incorporated the journal into his Introduction to American Studies curriculum. Hoelscher said the site, like the field of American studies, questions uneven economic development, symbolism, identity and popular culture.

“I wanted to make a point that American studies is not just about the past, it’s ongoing and living and it’s a vibrant field today,” Hoelscher said. “One example of that is the End of Austin project. Elements of this long history of American studies are found in that project.”

Lewis hopes the publication will cause people to look at the greater consequences facing the city.

“There’s discussion between people in a democracy about the kind of place they live in, and it needs to happen more often,” Lewis said. “Rather than just being passively floating down the river like a leaf and not caring about whatever future happens.”

Although TEOA brings some serious issues to light on people’s perspectives of this changing city, Lewis does not think the site is necessarily about the “doom” of Austin.

“We’re not pessimistic, but we’re trying to ask, ‘What if the rhetoric doesn’t play out the way people assume it will?’” Lewis said.

TEOA is not only for the community, but also serves its creators.

“End of Austin is a way for us to look right over the fences of UT, look into the community, be a part of the community and create discussions about what the city’s going to be like,” Lewis said.

The latest issue of TEOA can be found at www.endofaustin.com.