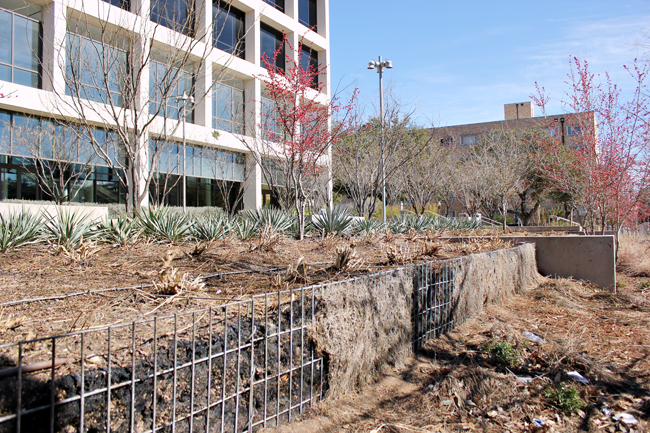 In the aftermath of the Belo Center of New Media brush fire, UT safety and security officials plan to meet soon and discuss establishing an outdoor fire evacuation policy.

While fire departments around Austin gear up for wildfire season, the University is working to establish its own official outdoor fire procedures.

On campus, the division of Fire Prevention Services focuses on landscaping guidelines in order to prevent fires.

“[The] landscaping processes follow a guideline, which was put together after the Bastrop fires [of 2011],” UT fire marshal Jimmy Johnson said.

The division also focuses on making sure the community is educated on issues related to fire prevention.

“We want all of our students, faculty and staff on campus to recognize that there is a potential for fire, whether it’s in buildings or based off of some type of wildfire,” Johnson said. “We want people to be cognizant of their surroundings, know how to exit when directions are given to do so and to take all alarms seriously. If you have a plan in place, that will serve you well.”

On Jan. 13, a bush caught fire outside of the Belo Center for New Media. Someone pulled the fire alarm, prompting students and faculty to leave the building and walk toward the source of the fire.

After the bush fire, The Daily Texan learned there was no clear evacuation plan in place for outdoor fires on campus. Campus safety and security officials said they plan to meet to discuss the establishment of an outdoor fire evacuation policy but have not yet announced an official outdoor procedure.

The University is equipped with an outdoor warning system that can be used in case of fires. The Pickle Research Center and Lady Bird Johnson Wildflower Center were recently added to the system in fall 2013.

When performing fire prevention procedures, the fire department must go through the City Arborist Program, which grants permits based on compliance with tree ordinances.

“The City of Austin is one of the few towns that actually has extremely strict tree ordinances,” Austin Fire Department Capt. Josh Portie said. “It reduces what we can remove and how we can remove it.”

City Arborist Michael Embesi said any type of tree is protected by law once it reaches 60 inches in circumference.

“The ordinance exists to protect our largest trees, which provide the greatest service to the citizenry,” Embesi said. “A full-grown tree cleans the air, cleans our water and has more aesthetic value.”

An area with more trees does not necessarily make it more susceptible to fires, according to Embesi.

“Trees help create shade, which helps keep the area cooler,” Embesi said. “They also help prevent vegetation from growing because that shade blocks the light, so trees could actually assist in helping to prevent the spreading of a grass fire, for example.”

According to Portie, fires are inevitable no matter how many precautions are taken.

“At the end of the day, there’s nothing we’re going to be able to do to stop all fires,” Portie said. “Fire is a natural phenomenon.”