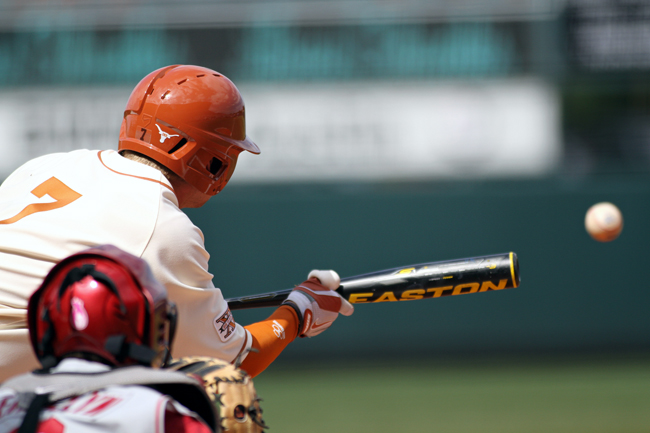 Senior center fielder Weston Hall lays down a bunt. Bunts and other sacrifice hits have become commonplace under head coach Augie Garrido's rule at Texas. Garrido attributes part of last season's struggles to his players' unwillingness to buy into his small-ball approach.

Texas head coach Augie Garrido’s small-ball approach is all about committing oneself to the good of the team. There’s no room for selfishness or entitlement.

Last season the Longhorns (27-24-1) missed the postseason for the second consecutive year, something unheard of in Garrido’s time at the helm. In an off-season filled with changes, the coach made sure to address the sense of entitlement that seemed to plague last year’s team.

“Making change is always a challenge for anyone,” Garrido said. “Changes needed to be made, and they have been made, and now the players are concentrating on being players instead of crossing into the coaching field.”

The attitude of last year’s squad caused a lack of focus, for the offense especially. Fifteen of Texas’ 24 losses were by two runs or less, revealing the team’s inability to win close games.

Although Texas averaged just over three runs per game last season, it combined for 61 more hits and an on-base percentage .41 points higher than its opponents, which makes its inability to score runs more puzzling. If you ask the Texas hitters, though, what’s past is past.

“Last year is over with. We don’t talk about last year,” sophomore C.J Hinojosa said. “We just came in with a new slate. We know it’s grind time and we came in here ready to work.”

Despite last year’s struggles, the bench boss isn’t giving up on his signature small ball. Playing as a unit is something Garrido has stressed as key to manufacturing runs this season. Working together is the key ingredient to getting over the hump offensively.

And with its two top hitters — senior Mark Payton and Hinojosa — returning this season,  Texas has the leadership to bring a team of veterans and newcomers together.

“That’s our job as seniors and as leaders, to show the younger guys how to take care of business,” Payton said. “It didn’t happen lately, but it’s our turn to show these guys the right way to play.”

Texas must hope its new commitment to preparation will translate to the scoreboard this season, bringing the program back to prominence in the process.

“I think the difference has a lot to do with our off-season, the work that we put in,” senior Nathan Thornhill said. “We had to earn our way back over in the locker room for example and we have to earn everything. Doing that we’re going to have, I don’t want to use last year’s terminology, but we are closer because we went through a lot of stuff together this fall.”