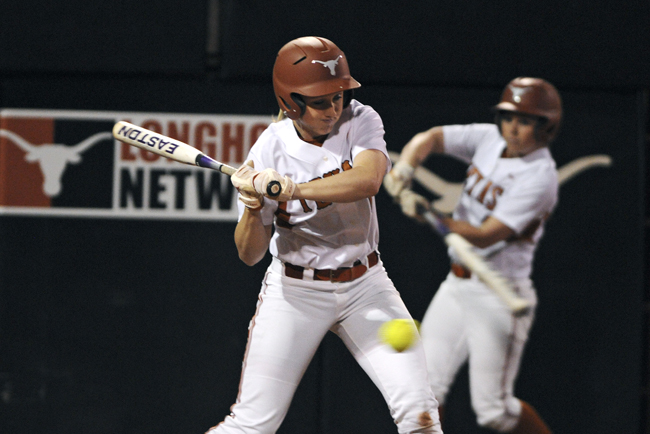 Senior Taylor Thom is the unquestioned leader of this year's Longhorn squad. Texas will rely on Thom's big bat to drive in runs on the field, and, with three years of collegiate experience, expert her to mentor some of the younger players.

As a junior at Vista Ridge high school in Cedar Park, Taylor Thom led her team to the 2009 UIL State Semifinal game at Red McCombs Field in Austin. The Lady Rangers lost 3-0 to Pearland in a close contest.

Fast-forward four years to 2013 when Thom found herself in the postseason at the College World Series in a semifinal matchup against No. 1 Oklahoma. The Longhorns would lose that game 10-2 to the Sooners, who would go on to beat Tennessee and become the World Series champions.

“Going to the World Series is still my favorite team memory,” Thom said.

Now, preparing for her final campaign as a Longhorn, Thom looks to build on a record-setting junior season with a new supporting cast of young faces. One of just four seniors on a team that includes 13 underclassmen, Thom is the undisputed veteran with more experience to speak of than several other players combined. This past summer, Thom was a member of the 2013 USA Women’s National Team, where she competed on the international stage — as well as in the World Cup — with former teammate Taylor Hoagland.

“It was amazing getting to play with such incredible softball players,” Thom said. “Traveling all over the country and the world. It was such a great experience and I thoroughly enjoyed it.”

Recently named to the preseason Top 50 “Watch List” for the 2014 USA Softball National Collegiate Player of the Year Award, Thom ranks near the top in nearly every major category in the Texas records book. She currently sits fourth in runs batted in (135), seventh in doubles (37), eighth in runs scored (122) and ninth in home runs (28). In her final year as a Longhorn, Thom will look to match her historic senior season at Vista Ridge where she posted a .528 batting average with 50 runs scored, 21 runs batted in, 15 doubles and 34 stolen bases.

Coming off a team-high 15-home-run season, the hard-hitting shortstop has the ability to change the game with one swing of the bat and is always a threat at the plate.

Perhaps the most decorated player on the team, Thom is confident about the prospects of this year’s group.

“We definitely lost some key players last year, but we have some good ones that are going to be able and come in and fill that hole that needs to be filled,” Thom said. “I think we are looking great and I am excited to see how our first game against LSU goes.”

Whether the Longhorns can return to the World Series remains to be seen, as a tough conference schedule — which includes No. 1 Oklahoma and No. 16 Baylor — lies ahead. But if Thom’s senior year at Vista Ridge is any indication, her best season is still ahead of her.