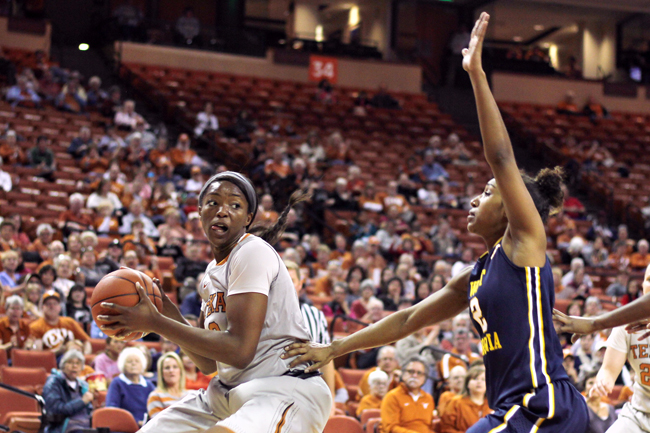 Junior forward Nneka Enemkpali has been the Longhorns' go-to player this season, averaginga team-high 13.1 points and 9.2 rebounds per game.

But Aston and Texas left their growing pains in the 2012-2013 season, entering this year with a plan to “own it,” play with heart and pursue their biggest conference threat: No. 9 Baylor.

“Nobody has beaten Baylor yet, so I think we’re still chasing them until someone beats them,” Aston said in an Oct. 16 season preview. “The league went through some hard times last year, and, obviously, Baylor was head and shoulders above everyone.”

Much has changed since last season: Brittney Griner graduated, the Bears remember what a loss feels like, and Texas has remembered in recent games what it takes to win. The No. 7 Bears (13-3, 7-1 Big 12) still top the conference, but Texas no longer cushions the bottom.

Here are three keys for Texas to pull off an upset against Baylor:

1) Pass to Chassidy Fussell and Brady Sanders behind the arc.

Against Kansas on Tuesday night, the duo combined for seven 3-pointers on 80 and 75 percent shooting from behind the arc, respectively. Maximizing this hot streak with Nneka Enemkpali’s penetration will make the Longhorns much more difficult to defend.

Enemkpali, a junior forward, is averaging 13.1 points and 9.2 rebounds. The Kansas game brought her sixth double-double of the season, and last week’s 15 points and 21 rebounds against No. 18 West Virginia earned her Big 12 Player of the Week this week.

Without Griner, Sims controls the Bears’ offense. Sims is averaging 29.5 points and 4.6 rebounds through Big 12 play this season. When Sims is on, she pulls off overtime miracles such as the three-point play in the last four seconds of overtime against No. 8 Oklahoma State. But when she’s off — like she was in the 76-60 loss to Kansas — Baylor struggles as a whole. Restricting Sims to four of 19 in the second half after allowing her 20 points before halftime, Kansas pulled away. Coming off their first conference road game in the very gym that dealt the Bears their first conference loss should motivate the Longhorns.

“[Sims] is the best point guard in the country,” Aston said after last year’s game. “It’s her ability to take over on both ends — she dominates on the defensive end.”

Texas has shown it’s capable of contending with conference foes and ranked opponents, such as Baylor. Now is the Longhorns’ chance to prove they’ve eliminated senseless errors and overcome their road struggles.