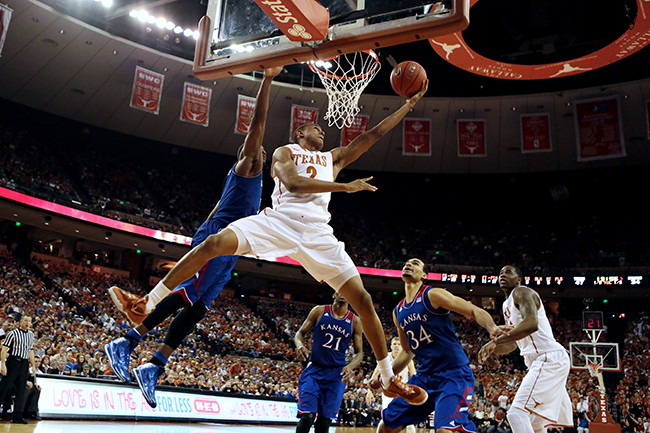 Texas fans witnessed a sight they haven’t seen in quite some time Saturday at the Frank Erwin Center.

In front of an electrifying, sold-out crowd, the No. 25 Longhorns overpowered No. 6 Kansas, 81-69, for their first win against the Jayhawks since 2011.

“I am very happy and excited for our guys because they went and earned it,” head coach Rick Barnes said. “They worked hard and deserve this kind of atmosphere. I told them before the game that they deserve it but are going to have to earn it.”

Texas and Kansas traded leads to start the game as the teams exchanged several fast-paced, sloppy early possessions. With 15:18 remaining in the first half, freshman guard Isaiah Taylor hit a 3-pointer to give the Longhorns the lead — a lead they would hold for the rest of the game. Texas held the Jayhawks to just 23 points in the first frame, Kansas’ second-lowest point total in a half this season.

The Jayhawks produced more offense in the second half, but failed to slow down the Longhorns’ scorers or create any real momentum as Texas outplayed the reigning Big 12 champions.

Barnes used a combination of man and zone defense to hold Kansas to a shooting percentage of just 38.5 percent on the day. Sophomore guard Demarcus Holland led the squad on defense, helping contain the Jayhawks’ star freshman Andrew Wiggins, who had just seven points on 2-for-12 shooting from the field. Wiggins, who came into the contest averaging 16.5 points per game, failed to record a field goal in the first half and fouled out of the game late in the second half.

“[Holland] was outstanding,” Barnes said. “All year long, I am not sure if people have appreciated what he does. I’m telling you, though, his teammates and our staff appreciate him. He understood what he needed to do.”

Texas was just as impressive on the offensive side of the ball, highlighted by performances from Taylor and junior forward Jonathan Holmes. Taylor finished with 23 points while Holmes poured in 22. It was the first time this season that two Longhorns have surpassed the 20-point mark.

“They had us on our heels the whole game,” Kansas head coach Bill Self said. “Their speed offset our length. I thought Taylor was the best player in the game. It was pretty much a dominating performance by the Longhorns over us today.”