Despite win streak, Barnes cautions against ‘drinking the poison’ 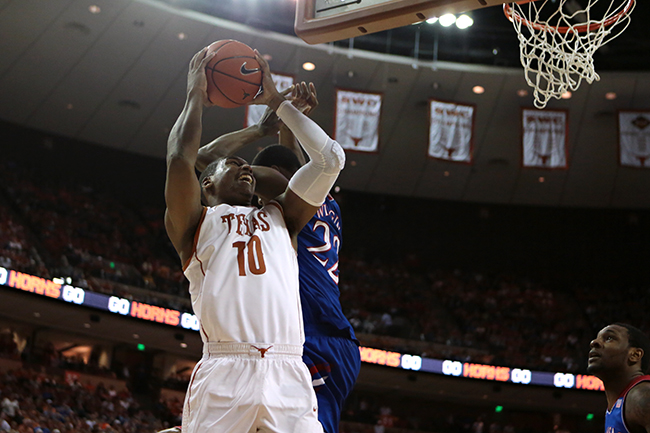 When freshman point guard Isaiah Taylor entered the locker room at Saturday’s halftime, he had much to be proud of: 11 points on 4-for-6 shooting.

“[Barnes] told us that to keep the pressure up,” Taylor said. “We knew we were up double digits at half time and he just told us to keep our foot on their throat and not to let up defensively.”

So the Longhorns did. They didn’t just keep their feet on the Jayhawks’ throats — they kept their bodies between the Kansas basket and the ball. Junior forward Jonathan Holmes and sophomore centers Prince Ibeh and Cameron Ridley combined for an impressive nine second-half blocks.

“They definitely had a big lineup,” Kansas sophomore forward Perry Ellis said. “I tried to continue the attack, but we did not come with a lot of energy tonight. The loss is the result of that.”

That big lineup and energy is what sets the 2013-2014 Longhorns apart from their last season counterpart. Texas’ 41.8 rebounds on the season is up from last year, and it is now outrebounding teams by almost seven per game. On Saturday, the Longhorns swatted 12 shots and is ranked seventh in the nation in blocks per game, which allowed them to limit Kansas to .385 shooting.

“Bill Self does a terrific job getting the ball into high percentage shots,” Barnes said. “Half of their points come from in the lane and we wanted to really take that away. You can’t do that one-on-one or two-on-two; you have to do it as a group.”

Sophomore guard Demarcus Holland spearheaded the effort as he suffocated freshman sensation Andrew Wiggins. Wiggins fouled out with 2:33 remaining, just seven points to show for his 30 minutes on the court. He has averaged more than twice that through the season.

“On good teams, you’ve got to have that one guy that’s always in the right spot, always trying to get an offensive rebound and trying to box out a key player,” Holland said of his role on the team. “I knew he would try to be aggressive and put fouls on me to get me out of the game.”

Texas had never won four consecutive games against top 25 opponents in school history until now. But Barnes knows this stretch doesn’t guarantee much. He said he’s proud of what the team has done and earned — but half of conference play remains.

“It is such a fine line between winning and losing,” Barnes said. “If you start drinking the poison and think that you are there, it all gets away. This is one game, and I want them to enjoy it because they should. But we have a long way to go.”

Against Kansas, Texas didn’t seem to be drinking any poison. The Longhorns were just caught up in offense and letting the hype get to them. The hype motivated disciplined play and Texas showed its defense would lay the foundation for success.

But as it heads to TCU on Tuesday, Texas must be careful not to take even a sip.