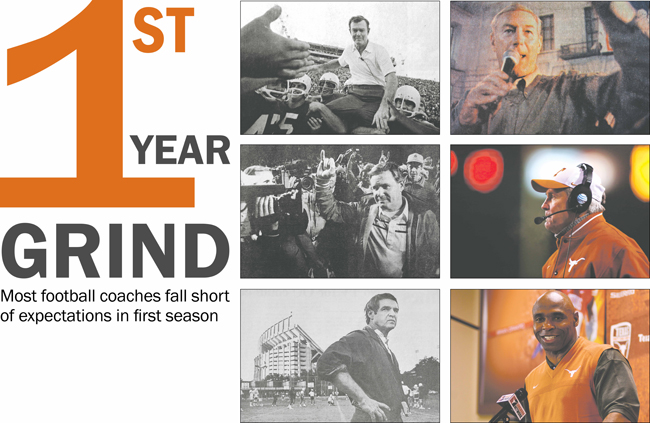 While there may be soaring expectations for football head coach Charlie Strong, his predecessors can attest to the challenges — both on and off the field — of being a first-year head coach in Austin.

Since 1950, six Texas coaches have made their Longhorn coaching debuts, featuring a 67.6 winning percentage in their first years. In comparison, former head coach Mack Brown went 9-3 in his first season, but stepped down in December after three seasons in which the program produced a 62-percent winning percentage.

“When you’re a top program in the country, you have to be about championships,” Strong said at a Jan. 15 press conference.

Only three of Texas’ 28 previous head coaches won a conference championship in their first season: Eugene Van Gent in 1916, Berry M. Whitaker in 1920 and Fred Akers in 1977.

Akers’ team finished 11-0 in the regular season and fell just short of a national title with a loss to Notre Dame in the Cotton Bowl.

But even his fruitful first campaign was preceded by challenges, namely the off-field politics of the sport. Although serving nine years on popular head coach Darrell Royal’s staff eased the transition to Austin for Akers, his hire still drew criticism from many alumni and former players who wanted long-time Royal assistant coach Mike Campbell to take over and disagreed with Akers’ elimination of the wishbone system in favor of the ‘I’ formation and single-back sets.

“I was a young guy who didn’t fully understand some of the politics and some of the pressures that come with hailing an icon as a head football coach, Darrell Royal, and I had to learn to deal with that,” Akers said.

Strong will face a similar situation as he attempts to build upon Brown’s legacy while juggling the needed changes to the program. He has met resistance already in his first month on the job — notably, Texas billionaire patron Red McCombs calling Strong’s hire a “kick in the face” because he and a few other boosters were not involved in the selection process. McCombs later apologized to Strong for the comment.

It is a pressure-packed, push-pull atmosphere that dominates the football environment at Texas. The Longhorns had a $165.7 million operating revenue for 2012-2013, the highest in college athletics. This creates financial flexibility and donors with hefty influence. David McWilliams, former Texas coach and current UT associate athletic director, says the school features the most passionate fan base in America, but that comes with a caveat for coaches.

McWilliams, like Akers, was a long-time assistant coach at Texas before ascending to the head role in 1987 after one season at Texas Tech. He was accustomed to the responsibilities placed upon coaches at Texas, but says they could be a bit overwhelming at times, between recruiting, coaching and alumni demands.

“You would like for there to be more hours in the day because you can certainly use them,” McWilliams said.

Free time has proven to be fleeting for Strong in his first month with the Longhorns. He described his first nine days on the job as being “pulled in different directions,” and, between recruiting, personnel and speaking engagements, Strong has not exactly had time to meditate on the position.

Nonetheless, Strong is considerably more comfortable at Texas because of his experience at Louisville.

“This transition was a lot easier because I have head coaching experience, and I have been around it,” Strong said at his Jan. 15 press conference. “The first time around you take the job and you get to your office and you think, ‘What do you do?’ or ‘Where do you go?’ Now you have a plan together, and just follow the plan.”

Of the top 10 revenue-producing programs in the FBS last season, six of the schools — Notre Dame, Alabama, Michigan, Florida, Ohio State and Nebraska — have hired their active coaches in the past seven seasons. A decorated group overall, the six coaches had mixed success in their first seasons, with a combined 70-percent winning percentage 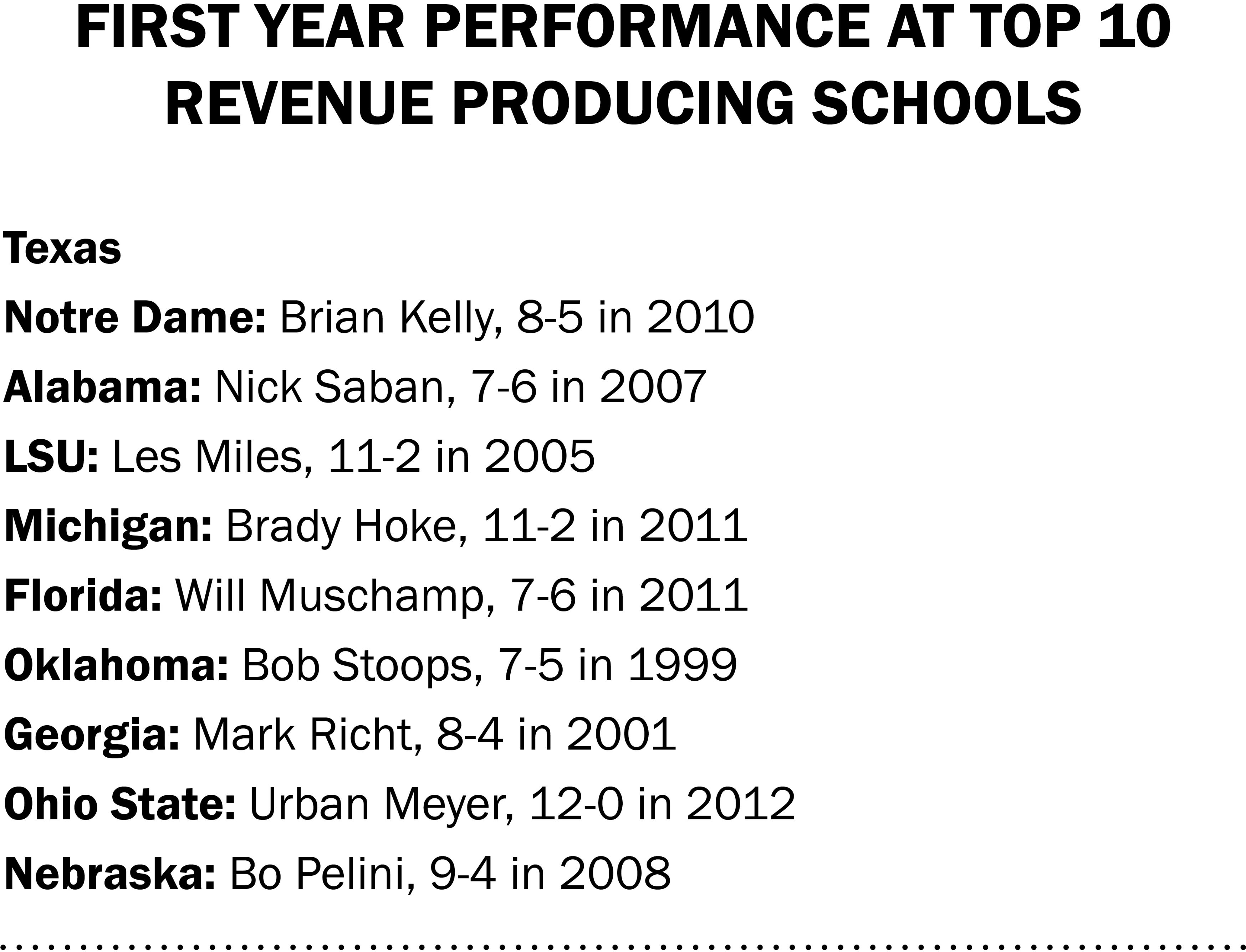 This number is greatly boosted by Urban Meyer’s 12-0 campaign at Ohio State in 2012 and Brady Hoke’s 11-2 season with Michigan in 2011, but Florida’s Will Muschamp had a much more reserved 7-6 record at Florida in 2011, as did Notre Dame’s Brian Kelly when he finished 8-5 the year prior. Perhaps the most notable example comes from Nick Saban, who went a pedestrian 7-6 at Alabama in 2007 before reeling off three national championships over the next six seasons.

Despite the mixed history of early success, championships, as Strong stated, will still be the expectation. It is a perilous environment, which McWilliams says can be navigated with patience.

Akers says he did not start to feel the pressure of winning at Texas until his seventh year. He credits that to being familiar with the environment in Austin, but he also admits that early wins, which helped establish a strong support system, played a significant role in his level of comfort.

“You’ve got to have support,” Akers said. “I think he’s going to step up and declare, ‘We’re going to do what Mack’s intention was — get it back on track.’ And [Strong] is the one who’s going to do it.”