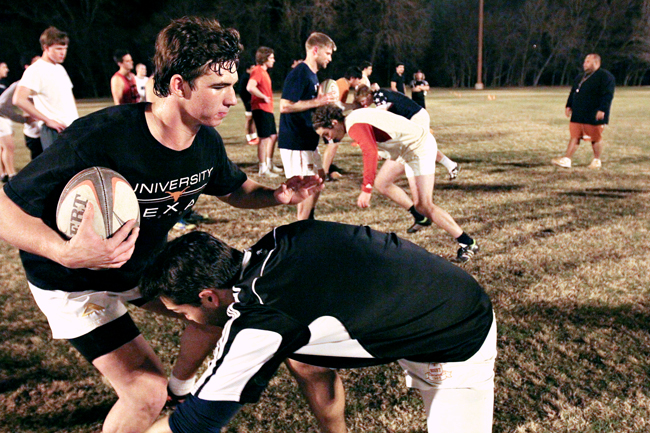 Communication studies freshman Reed Hogan, who has become a standout player for the rugby team, practices with his teammates in anticipaton of their upcoming season.

Those mourning the end of the resonating hits and world-class athleticism of football season need weep no more.

The Texas Rugby Club carries the thrills of football season into the spring semester. The club begins 15-man rugby play at the Whitaker Fields, typically used for intramurals, against North Texas on Friday, hoping to build on a fall semester that saw the Longhorn seven-man rugby team finish the season 12th in the nation.

“We don’t set goals in terms of wins or losses,” first-year head coach Christopher “Bus” Hopps said. “Our goal is to become the best team in Texas.”

Hopps takes control of a team that finished second in its conference last year, losing only to Texas A&M, but the coach has his work cut out for him, as the Longhorns are one of 12 teams that have been invited to compete in the Varsity Cup, the top postseason tournament in collegiate rugby.

The new coach inherits a core of veterans, including captain Danny Camara, who oversaw the club’s transition from a casual, recreational sport to one of the premier competitive rugby programs in the nation.

“The team culture has definitely switched from a fun thing to do on the weekends to a professional, legitimate program,” Camara, a psychology senior, said. “Everyone who comes to Texas rugby realizes it’s something special.”

Hopps also has the privilege of coaching an enticing newcomer, flanker Reed Hogan. Hogan, a communication studies freshman, comes to the Longhorns from national high school rugby powerhouse St. Thomas, in Houston, where he won three state championships and was named 2013 Texas Forward of the year.

Chemical engineering senior John Boudreaux, a current teammate of Hogan’s and his former high school team captain, said Hogan will be a star player this year.

“We expect to give him the ball a lot and to let him make things happen,” Boudreaux said.

Hogan’s rise from the bench of the sevens B team exceeded all expectations of a freshman player.

“Sevens is so demanding and there is so little room for error that we don’t want [freshmen] in that environment right away,” Boudreaux said. “[Hogan] showed that he could not only hang with us but with the top players of the nation as well.”

Hogan’s success in high school and with the Longhorns caught the eye of USA Rugby scouts, who invited him to Phoenix to tryout for the under-20 national team over winter break. Although Hogan did not make the national team on his first attempt, he has two years of eligibility left to try again.

If recent history is any indication, Hogan is more than capable of bulldozing through initial discouragement, rising to the top of the player pool and leading the Longhorns to victory on the rugby pitch.

“I want to be the No. 1 team in our conference by the end of the season,” Hogan said. “I want to do whatever the team needs me to do to achieve that goal.”