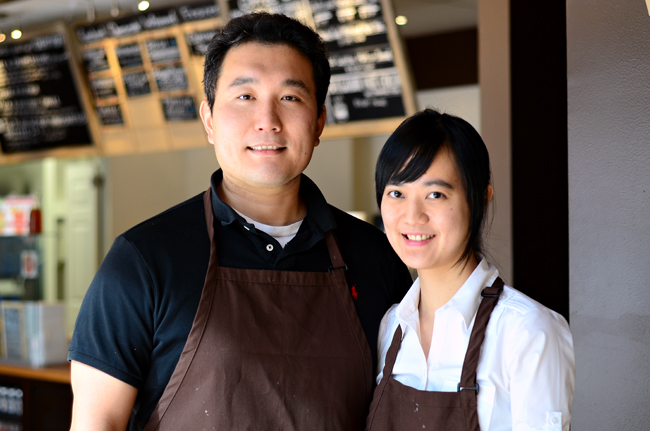 UT alumni John Sun and Tina Yang recently opened Cream Whiskers, a cream puff bakery near campus. While cream puffs are served at other bakeries around Austin, the husband-and-wife duo models its recipe after the pastries they tried in Taiwan.

As electrical engineering and microbiology graduates, UT alumni John Sun and Tina Yang never expected to return to Austin as owners of a cream puff bakery.

Cream Whiskers is located on 22 ½ Street, between Rio Grande and Pearl Street. The bakery opened Oct. 5 and has a variety of cream puff custards, such as strawberry cheesecake, cookies and cream and pumpkin spice.

After graduating in 2004, Sun worked at a computer manufacturing firm while Yang went to pharmacy school. What started as a middle-school friendship resulted in a college relationship, with the two eventually marrying in 2009.

Neither of them ever considered opening a bakery until they were visiting relatives in Taiwan, when they ordered two cream puffs to go at a bakery in a train station. Both Sun and Yang were pleasantly surprised.

“I’m not really a fan of most desserts because they are too sweet for me,” Yang said. “When I first tried a cream puff, however, I was instantly taken by surprise. It had such a light, airy taste.”

In early 2013, Sun left his job to open Cream Whiskers. Yang continued to work at the pharmacy, but joined Sun in creating and opening the bakery.

“We loved the cream puffs so much that we wanted to bring them to America,” Sun said. “We decided to start our business in Austin because people in Austin are not afraid to try new things.”

Cream puffs are served at several bakeries around Austin, but Sun and Yang modeled their recipe after the pastries they had tasted in Taiwan. The cream puff shell is made up of four basic ingredients: egg, flour, butter and water. Perfecting the ratio of the ingredients and oven temperature proved to be a challenge. It took Yang several attempts to finally find the right consistency.

Two weeks before the grand opening, Cream Whiskers hosted a five-hour “free puffs” event outside the bakery. Two-hundred students were invited to try vanilla cream puffs and fill out feedback surveys. The students also suggested other flavors they wanted to see the bakery offer, such as coffee and chocolate.

“I live right across from Cream Whiskers and thought it looked welcoming, so I decided to check it out,” finance senior Johnathan Haryono said. “It’s a nice place to study, play board games and hang out with friends. Since I live close, I come almost every day.”

Sun and Yang plan to open two or three more bakeries in Austin before expanding their business to other parts of Texas. The owners promote their business through social media platforms and by attending sponsorship events.

“Right now, our primary marketing strategy has been through word of mouth and apps like UMeTime,” Yang said. “John and I are definitely looking into paid advertising, event catering and online ordering to grow our business.”

Sun’s and Yang’s favorite part of being business owners is the learning process and adventure involved.

“Take risks and do everything one step at a time,” Sun said. “Accept the fact that hard times are inevitable, but never give up. The end result is well worth it.”