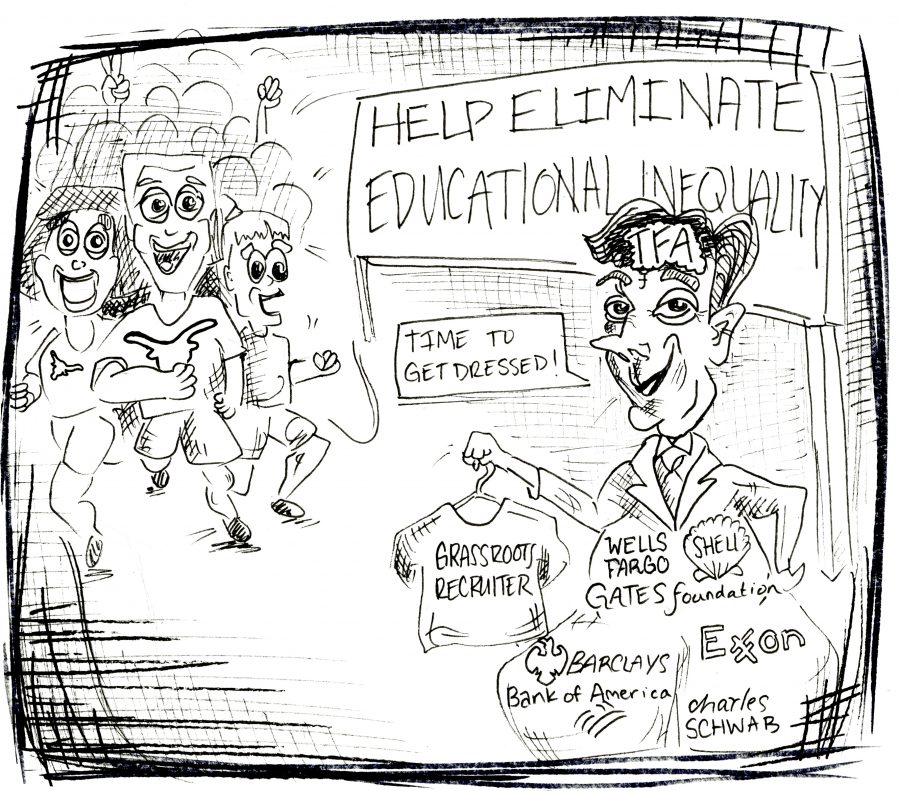 UT had more recruits in Teach For America’s 2013 cohort than any other university in the nation. Teach For America, an organization that places high-achieving college students into low-performing schools in an effort to directly address educational inequality, appears for many UT students to be an avenue toward participating in a broader movement for social justice.

For me, a student who considered and ultimately decided not to apply to TFA, the program’s appeal had little to do with the organization’s promises that I would be a part of the “civil rights movement" of our generation. It wasn’t that I wasn’t interested in working on the problem of educational inequality. I was. But my first encounters with TFA challenged the organization’s claim that it was in fact working toward ending educational inequality and revealed the many problems with the organization. Among them: the minimal training its recruits receive before taking control of their own classrooms, its role in the casualization of the teaching profession and its unclear record of increasing student achievement.

Moreover, despite the radical rhetoric TFA often employs, it has no public record of denouncing austerity and de facto school segregation, and has received generous donations from conservative foundations — hardly the marks of an organization that claims to be part of a progressive revolution in educational justice.

Still, I remained interested in TFA for pragmatic reasons: I knew I wanted to be a teacher in an under-resourced district, and TFA was a way to do that while getting a master’s degree for free.

Unlike many of TFA’s recruits, I planned to be a career educator, and looked to TFA as more than just a stepping stone to adult life. For this reason, I played with the idea that I was exceptional among TFA recruits, that a handful of life experiences and political views made it OK for me, a white woman, to dive into America’s lowest-performing schools untrained.

After all, I had attended a multi-racial school in an urban setting, worked as a camp counselor throughout my college summers and had several experiences developing curriculum and lesson planning. I had critical-theory coursework and anti-racist organizing experience. I considered that perhaps these were enough to allow me to stand in front of a class of students who more than likely would not look like me without reifying racial hierarchies.

Ultimately, my decision not to apply to TFA came down to two unresolvable issues. First, given my knowledge of TFA’s role in education “reform,” there was no way I could comfortably be associated with the organization — even if I knew privately I wasn’t drinking the Kool-Aid. TFA cannot be separated from the corporate-driven movement it is embedded in and of which its alumni have become key leaders. This movement, funded in large part by wealthy benefactors such as the Gateses and the Waltons, the families behind Microsoft and Wal-Mart, respectively, relies on applying business practices such as increasing competition, emphasizing data and evaluation and promoting efficiency in the educational sphere. Despite huge investments of both public and private funds, these strategies have done little to increase student achievement and reduce educational inequality. Disturbingly, TFA as an organization propagates the same misguided assumptions of their big-time donors, among them the idea that all students can learn despite their circumstances, an assertion that grossly underestimates the role that poverty and racism play in the lives of students.

Second, I have come to believe that despite the limits of our current model of higher education, all teachers should be extensively trained before they enter the classroom. One TFA alum quoted in a recent educational study explained why: “My students need experienced teachers who know what works and who can implement it effectively … instead, they have me, and though I am learning quickly, I am learning on them.”

Additionally, teachers who seek placement in urban districts should be trained to build inclusive classrooms and work with curricular materials that are relevant to the demographics they are teaching, especially those recruits who are white and did not come from urban communities. One study of TFA’s training practices revealed that the conversations about the role of race in the classroom during TFA’s five-week summer training course “developed superficial racial know-how for white students … and offered little insight to corps members of color.”

Too often, TFA preys on idealistic students who are excited by the chance of putting their ideas into action and who are largely ignorant of the broader implications and potential problems of participating in such a program. For many of those students who are aware of TFA’s many problems and still decide to participate, their reasons for doing so, a need for free advanced education, are often quite valid. But until TFA fundamentally changes its model for teacher training, it should not be “used” as an avenue to the classroom by Longhorns who are serious about achieving educational justice. The many problems of TFA are too large and myriad to be addressed by even the best of intentions.

Editor's Note: A link to a study titled "Teach for America: A Review of the Evidence" has been moved to more clearly reflect the information it verifies.