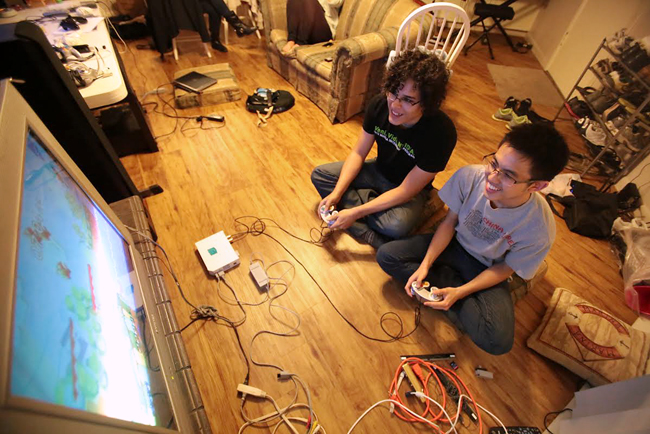 Matthew Chan took a seat on the floor of his North Campus apartment while his roommate Edgar Handal plugged a Wii gaming system into a television in front of them.

Handal, an engineering alumnus, apologized for having to set up the system, explaining they haven’t played Super Smash Bros. Melee in two weeks. After traveling to New Jersey in January and placing 33rd out of more than 600 entrants in the 2014 Apex tournament series, Handal said he was “smashed out.”

“Not all tournaments are equal,” said Chan, a music education fifth-year senior. “Leading up to [Apex] we played every day for at least four or five hours.”

The size of turnout for Apex is a reflection of the large Melee resurgence since the game’s decline in 2008, though Melee’s story began seven years earlier.

Chan and Handal, who joined the scene in 2008 and 2007 respectively, are two of the current Melee leaders and tournament organizers in Austin, with tens to hundreds of other players involved in the resurgence. The players come from all different backgrounds and range in age from teens to mid-twenties.

“A lot of the people we’ve met have been fun people, good friends and people to hang out with,” Handal said. “You want new people to come in and you want them to be friends with each other, and you want everyone to get better at the game.”

Members of the Melee scene bond over their shared interest in the video game online through message boards, YouTube uploads or tournament live-streams. In person, Melee fans meet under the UT student organization Smash Club, and hold Smashfests and tournaments open to all members.

In 2008, the release of a new game, Super Smash Bros. Brawl, drew players away from Melee and caused the scene to become stagnant. Joshua Jebamony, linguistics senior and member of the Austin melee scene since 2007, said he realized he didn’t like Brawl competitively and saw Melee tournaments quickly die out as the new game amassed popularity.

Although the Melee scene shrunk after the new release, Chan and Handal wanted to reverse the process. As officers of the Smash Club, the duo committed to promoting Melee and supporting the community, hosting regular Smashfests and tournaments on campus.

“We would use meetings as get-togethers where we play Smash as a way to get newcomers to just play and have a good time,” Chan said. “It’s safe to say, for the both of us, that we’re passionate about Melee, and the community by extension.”

As Melee grew older, tournaments started broadcasting online through live streams. In July 2013, the Melee scene saw a spike in the game’s revival during the Evolution Championship Series, known as Evo, which was the largest Melee tournament in the world, with just less than 700 entrants. Melee matches at Evo 2013 also reportedly broke the record for the most-watched fighting game of all time, with about 134,000 viewers live streaming the event.

“Thousands of those people [who watched the live-stream] don’t play Melee but were watching the best of the best, so that generated a ton of lasting interest,” Jebamony said.

Last December, Chan and Handal played on Melee’s momentum from Evo and hosted Forte, one of the largest two-day Smash tournaments in Texas in years. The tournament had 86 entrants and even brought in a nationally known player.

“A lot of the out of state people commented that it was really well-run, which we were really proud of because it was our first multiple-day event and one of the largest events we’ve ever hosted,” Handal said.

While Chan said they’re proud to be a part of the community and love building it, he said they wanted to change the Austin Melee scene as a whole, making it more friendly and approachable to both new players to the scene and to the game itself.

“The overall sense of unity in the community is really cool,” said Phillip Kieval, English freshman and new Smash Club member. “You build a sense of pride in your local scene and its players. They give you something to cheer for at a national scale as well as set goals for you to achieve for yourself. We all push each other to get better so we can represent our community on a scale greater than just ourselves.”