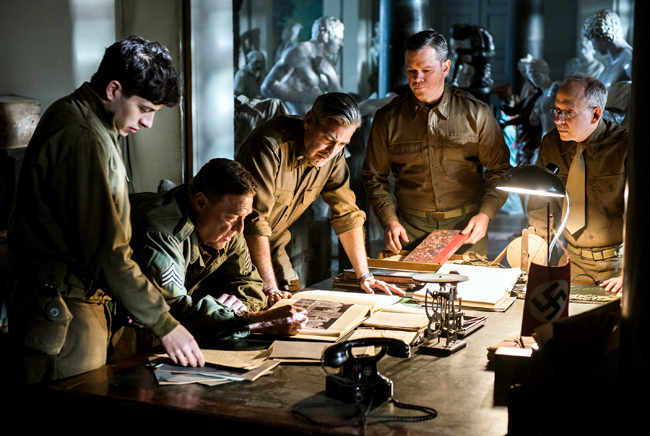 There’s a long list of actors who have tried their hands at directing, but only a few truly achieve success. For every Ron Howard or Ben Affleck, there are 10 Danny DeVitos — the actor-turned-director responsible for the disastrous “Duplex.” George Clooney’s directorial career is neither a decisive disappointment nor a smashing success, but after five films one would expect Clooney would have gotten a little better. He’s made four mediocre films as well as one great one, “Good Night, and Good Luck.” Unfortunately, “The Monuments Men” continues Clooney’s cold streak, failing to establish any narrative purpose, vivid characters or even a discernible personality.

Set in the tail end of World War II, “The Monuments Men” tells the true story of a group of art historians tasked with saving art stolen by Nazis. Frank Stokes (Clooney) divides the group, sending them to various corners of the European front to track down some select artifacts.

“The Monuments Men” boasts a truly impressive ensemble cast, including Clooney backed by the likes of Matt Damon, Cate Blanchett, John Goodman, Bill Murray and Jean Dujardin, but there’s not a single memorable character among the bunch. Blanchett is the only cast member whose performance could be considered memorable, alternating between a charming and cold character that exists purely for narrative convenience and is disregarded in the film as soon as possible. Everyone else is playing variations of their publicly established personas. But there are some moments, such as Murray listening to a recording of his daughter singing a Christmas carol or Damon accidentally stepping on a possibly defunct land mine, that allow for some pathos to sneak in.

Even the film’s approach to its characters is misguided. After a playful set of introductions, “The Monuments Men” takes a sitcom-esque approach to its characters, pairing them off and sending them on separate adventures. As Clooney ping-pongs between the various members of his ensemble, a tonal inconsistency sets in, with wry comedic set pieces and sarcastic exchanges mixed in with sappy, repetitive death scenes and some mythologizing.

But perhaps the film’s greatest misstep isn’t its scattershot approach to character work, but the utterly inconsequential nature of the film itself. Clooney’s directorial hand is workmanlike, staging each sequence with baseline competence but little flair or originality. Ultimately, he’s unable to justify his own film’s existence. Telling a story about war heroes in a bland, forgettable fashion has been done many times before, but to make a film about the importance of art in such an artless, manufactured and unfocused fashion borders on an act of hubris.

Despite having little worth mentioning, “The Monuments Men” isn’t a terrible film, just a film unworthy of the considerable talent on either side of the camera. It feels like a first draft of a great story, adrift in its tone and lazy in its character work. Clooney’s disappointing, mediocre effort is destined to accumulate as little fanfare as the film deserves.