Texas carries target on its back into matchup with K-State 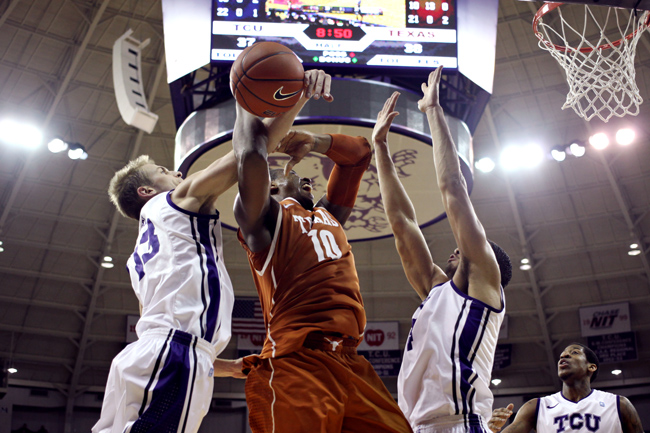 Junior forward Jonathan Holmes has played huge for Texas during its seven-game win streak and leads the team with 13.7 points per game this season.

After seven straight wins, Texas has moved from the hunter to the hunted.

The Longhorns (18-4, 7-2 Big 12) sit in second place in the Big 12, despite starting 0-2 in conference play. Texas produced four straight wins against ranked opponents before narrowly escaping against TCU, and now heads north to Manhattan, Kan., to face Kansas State (15-7, 5-4 Big 12) on Saturday.

The Wildcats were part of a four-team spread that Texas was able to overpower late last month, which helped it enter the rankings for the first time since 2011. Holmes hit a buzzer-beater 3-pointer to win the contest for the Longhorns against No. 22 Kansas State.

That win continued a streak for the Longhorns, which currently puts them at No. 15 in the polls after a huge upset victory against No. 6 Kansas last Saturday.

Texas is off to its best 22-game start since the 2010-2011 season, when it started 19-3. That start puts the Longhorns in a position they haven’t been in in quite some time — at the top of the pack.

“We are a good team,” head coach Rick Barnes said. “But it is such a fine line between winning and losing, that if you start drinking the poison and think that you are there, it all gets away.”

Against TCU, who sits in the bottom of the conference, the Longhorns lacked the intensity and aggressiveness that propelled them past four ranked opponents. Texas escaped with a 5-point victory, despite its worst shooting of the season.

If the Longhorns continue to play down to their opponents, they will have even greater trouble against Kansas State, who is striving to get back into contention after losing three of its last four games. The Wildcats started conference play 3-1 before coming to Austin, which began their small downward spiral.

But Barnes isn’t worried about his team’s new status and the risk that comes with it.

“February is a separation month or a catch-up month, whatever you want to call it,” Barnes said. “There are a lot of games left to play. But I’m not going to buy into the ‘just cause we’re ranked people are going to play any harder.’ I think Kansas State would play just as hard if we were 7-2 or 2-7. I believe that.”

Texas faces the Wildcats led by Holmes, who recorded 20 points and a career-high 16 rebounds against the Horned Frogs. Holmes has averaged 21 points and 10 rebounds in his last two contests and is expected to once again lead his team in Saturday’s matchup.