Alumnus raises about $30,000 to help Junior ‘The Wendy’s Guy’ get off the street 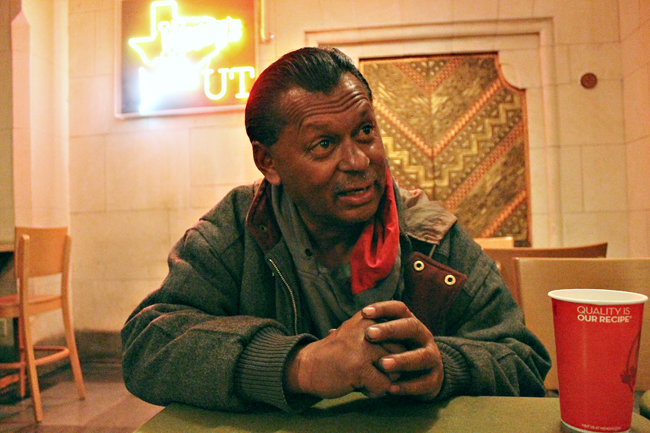 Ishmael Mohammed Jr., also known as “The Wendy’s Guy,” has been homeless for the past two years after working at the Texas Union for more than 13 years. UT alumnus Benjamin McPhual started an account on gofundme.com to raise money towards getting Mohammed off the streets.   " />

Ishmael Mohammed Jr., also known as “The Wendy’s Guy,” has been homeless for the past two years after working at the Texas Union for more than 13 years. UT alumnus Benjamin McPhual started an account on gofundme.com to raise money towards getting Mohammed off the streets.

UT alumnus Benjamin McPhaul has raised approximately $30,000 since 9 a.m. Friday through an online campaign for Ishmael Mohammed Jr., better known as “The Wendy’s Guy” or Junior, to help him find permanent living conditions and employment.

Mohammed said, if the online campaign is successful, he will use the money to ensure better living conditions for himself and for his children.

“If this money comes through, I want to get off the street; I’m tired of being homeless,” Mohammed told The Daily Texan on Sunday night. “I want to give some of it to my daughters and son, and come here and thank [the community.]”

Mohammed said he has struggled since losing his home.

“There is a time of day when I feel sorry for myself: no money, broke, no food,” Mohammed said. “I’m homeless, and tomorrow is going to be cold. I’m trying to figure out what I’m going to do.”

Mohammed, who referenced alcohol multiple times while being interviewed, said he was drunk when he broke the world sales record but insisted alcohol did not affect his job performance.

“I was so drunk inside this bitch here,” Mohammed said.

McPhaul, who graduated from the University in 2011 with degree in government, said he was inspired to launch the campaign after he saw Mohammed asking for money outside the Cactus Cafe on Thursday night.

The next morning, McPhaul started an account on gofundme.com to raise money toward getting Mohammed off the streets. The campaign has almost 1,000 Facebook shares. Since their exchange, McPhaul said he contacted Mohammed, who then met with his social worker.

“I am going to stop the donations tomorrow and start working on getting the money in the hands of some professionals who can administer the funds to [Mohammed],” McPhaul said.

McPhaul said he is working to address concerns that the money would not reach Mohammed.

“My intention is to give every single dime that is raised to him,” McPhaul said. “We’re going to do so in a way to ensure that it goes to helping him better his life.”

According to McPhaul, he has been in contact with social workers to make sure Mohammed will be able to successfully transition out of homelessness. McPhaul said Mohammed must to get a new copy of his permanent residency card before he can receive the money.

“We can’t just give a homeless man $30,000; he has nowhere to keep it, and it would be very unsafe,” McPhaul said. “We are trying to avoid a negative outcome and want to involve professionals.”

Engineering graduate student Rustam Miftakhutdinov said he used to go to Wendy’s and order from Mohammed almost every week with his roommate Jeffrey Eshleman. Miftakhutdinov and Eshleman completed their bachelor’s degrees in 2004.

Miftakhutdinov said he remembers Mohammed’s energy at the cash register.

“Other than being really fast with the register, he always had the greatest attitude,” Miftakhutdinov said.

Miftakhutdinov said he found out Mohammed was homeless when spoke with him on a bus last week.

“We talked on the ride to campus and he just seemed really down,” Miftakhutdinov said. “I gave him 10 bucks and went on my way.”

Eshleman said it would be nice to see Mohammed at the University again.

“Maybe he could get his job back,” Eshleman said. “He still has his skill probably.”