This year, make Student Government representative of all UT students, not just the Greek community 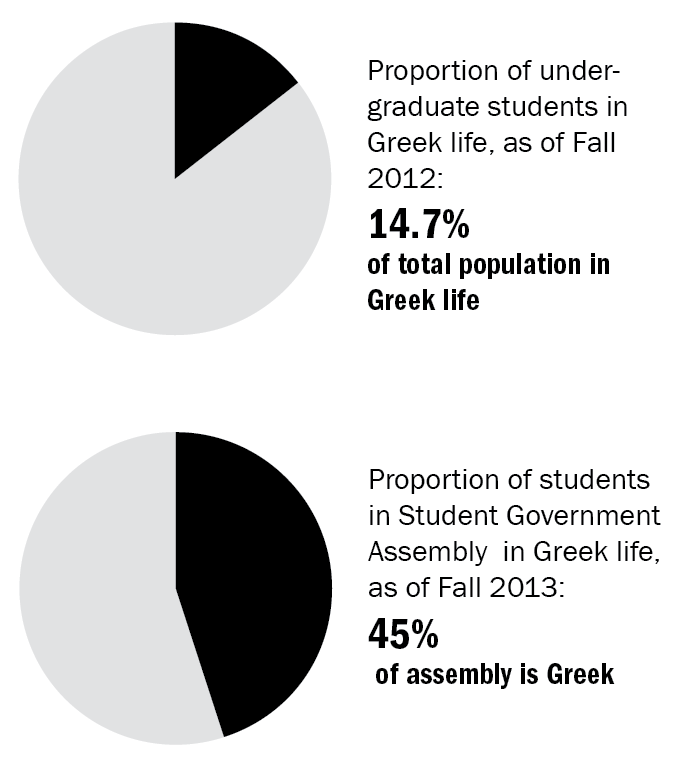 A pie-chart shows the discrepancy between the UT-Austin student population and the SG assembly.

Today could be considered an average Tuesday for most people. But, for Student Governments candidates, it is Judgement Day: the day when filing closes. As of right now, only two candidates, both of which can be described as decidedly traditional, are running: Kornel Rady, a government, corporate communications and communications studies senior, and Kenton Wilson, a government senior. By the end of today, the candidate pool will be finalized and the nominees for elected positions revealed.

Some regard SG elections as a way to drive change to the University, while others see it as a validation prize for being popular. Some see it as a joke, while others place a high value on the need for an organization like SG to represent their needs and ideas. But what exactly is the state of elections at UT?

The Greeks have ultimately created a dynasty out of a democracy. Year after year, there are a disproportionate number of students in SG who are in Greek organizations. But, rather than disparaging them, I wish to commend them. No other organization on campus has had such a consistent history of victory, and no other organization on campus has created a situation in which the only qualified candidates for higher office are the ones who have already been elected — leading to a seemingly never-ending cycle of Greek overrepresentation in SG.

Similar to popular political parties, the Greeks have driven out the competitors due to the sheer amount of people they can reach. Through blitzing and social media, the Greek candidates manage to reach the 7,000 students involved in sororities and fraternities. Non-greek candidates cannot dream of such a scope.

The dominance of Greek organizations in the election process is perceived as unfair, but why should we hate organizations that are simply successful at networking and voter outreach? Why do we keep railing against the inequality of representation in SG rather than identifying its causes? Why do we not realize the ultimate reason for this inequality is us?

Simply put, all we need to do to fix the inequality in SG is to care. Elections are important. Democracies have lasted thousands of years for a reason. It’s because they drive change. The representative nature of SG has been a catalyst for reform and campus improvement for years; In the 1940s, students organized a rally to support NAACP efforts to desegregate the university. In the 1970 SG elections, the unusual vote for a cartoon character over a legitimate candidate helped drive SG to reform itself to actually represent the opinions and ideas of the students.

I am not asking us to throw a revolution but, rather, to acknowledge that the only way we can drive change is to first change ourselves and decide to care about the future of our University and about how our representatives are representing us.

Rather than berating the Greeks, we should learn something from them and adapt. They elect their candidates through the Interfraternity Council endorsement list, but that doesn’t stop the rest of UT from electing its representatives through our own free choice. Ultimately, the students who are elected are our representatives, and that idea is what we should consider. How can we make sure the representatives have strong sustainable platforms? We should actually bother to vote. Vote for the ones who do and encourage others to do the same. How can we make sure representatives are actually following their platforms? Email them and hold them to their promises. Encourage SG to improve communication and raise its accountability policies. How can we drive change? Again, by caring. As can be seen by the current vice-presidential nominees, both of which are female, change is here. We just have to continue spearheading and demanding it for the change to both grow and be sustained.

This upcoming election season, we should consider an important idea: For better or for worse, these representatives are tasked with the daunting task of providing a voice for 50,000 students. Let’s choose the right ones.

Sundaram is a business honors, finance and international relations sophomore from Austin.

Editor's note: This article has been corrected to include the correct name of the Interfraternity Council and to reflect that fact that Sundaram is a sophomore, not a senior as originally stated.