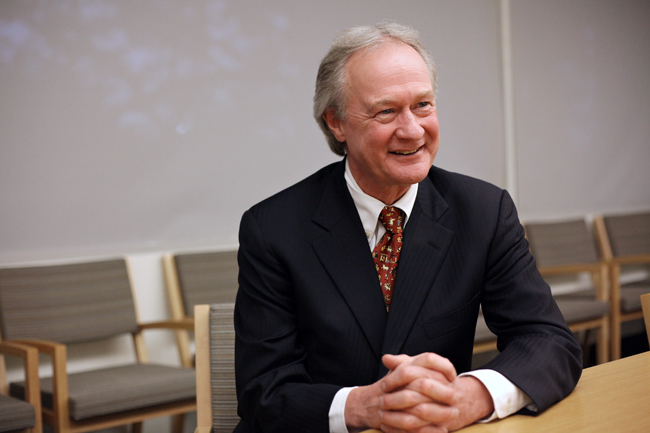 In his speech “Civility for a Great Society” at the LBJ School of Public Affairs on Tuesday afternoon, Rhode Island Governor Lincoln Chafee spoke about lessons learned from the Johnson administration and how those lessons could be applied to society today. " />

In his speech “Civility for a Great Society” at the LBJ School of Public Affairs on Tuesday afternoon, Rhode Island Governor Lincoln Chafee spoke about lessons learned from the Johnson administration and how those lessons could be applied to society today.

Rhode Island Governor Lincoln Chafee said during a speech at the LBJ School of Public Affairs on Tuesday that the recently increased levels of partisanship in American politics have prevented politicians from leading effectively.

According to Chafee, he lost re-election as a Republican senator in 2006, despite high approval ratings, because Rhode Islanders wanted a Democratic majority in the Senate.

Chafee said the increased polarization is partly due to members of Congress spending far less time together than in past years because of the ease of transportation today.

“[Former South Carolina Senator] Strom Thurmond used to say, when jet travel came in, the Senate changed because everybody would go back to their districts,” Chafee said. “But that’s the reality, you want to be seen in your home district.”

Chafee said politicians should value their integrity as representatives of the people more than gathering votes for the next election.

Robert Hutchings, the dean of the LBJ School of Public Affairs, said the best way to combat polarization is to fix things one at a time. He called to those dissatisfied with politics to take it upon themselves to work toward a solution by getting involved.

“Not everything is broken in government,” Hutchings said. “We’re in a bad period now, and there’s a lot of cynicism right now, but the best way to fight cynicism is to enter the arena … don’t complain, go out [and] make a difference.”

Pete Phillips, an Austin resident and ex-marine who attended the talk, said he believes a major problem to overcome is politicians whose only motivation is to stay in office, as opposed to working together toward a common goal. Phillips said he believes politicians too often allow the wills of special interest groups to sway their votes rather than focusing on the best interests of their constituents.

“The problem with American politics is that we’re too polarized today, and there just needs to be common sense brought back,” Phillips said.

“I think President Johnson would be dismayed at some of the attacks on the beneficial social programs that helped grow the middle class, particularly in education,” Chafee said.