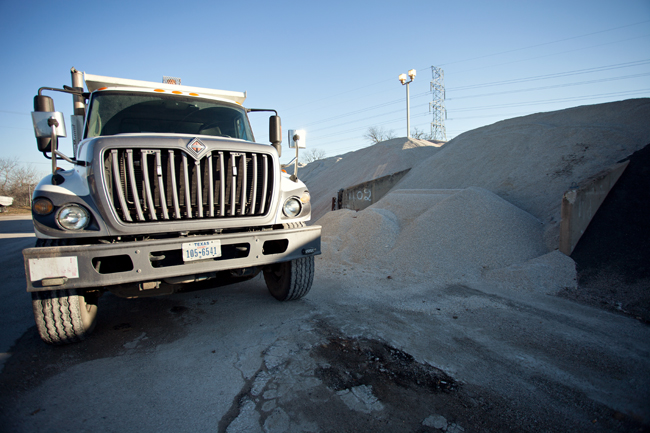 Buried in the heart of the city, surrounded by warehouses, dead-end streets and U.S. Route 183, lies a collection of materials that, together, make up Austin’s emergency preparedness plan.

The city has drawn extensively on its stockpiled safety materials in the last few weeks, as icy roads and freezing weather resulted in closures for UT, AISD and other public services.

City workers use the carbon-based mineral dolomite on streets and roads during “major ice events” affecting the entire city, according to Gerald Nation, Districts Maintenance division manager in the Public Works Department’s Street and Bridge Operation.

Nation said Austin decided to use dolomite exclusively instead of another material, such as salt, out of environmental concerns.

“The salt can have an environmental impact on the vegetation, so we just use the dolomite,” Nation said.

Nation said that because the city stores enough dolomite to handle two days of icy weather, it has had to replenish its stock since the last ice event on Jan. 28, but this cost hasn’t exceeded the amount allowed by the city’s normal operating budget.

“We’re actually still within our budgeted range right now,” Dean said. “We haven’t really gone over our budget, in terms of cost of dolomite.”

Marissa Morrison, economics and German senior, said she thinks the salt and sand mixture used in her hometown of Sartell, Minn., is safer than the material used in Austin. Morrison said she thinks Austin’s cold weather emergency preparedness does not adequately ensure the safety of motorists and pedestrians.

“I think [in Minnesota] they do a better job of dispersing [the road mixture] consistently,” Morrison said. “After the ice is gone, the sand is still there. I’ve seen a lot of people fall, especially on bikes.”

Government and Plan II senior Kristin Meeks said she drove on icy roads to and from the Bee Cave area for her job during one of January’s ice incidents.

Meeks said although main roads and thoroughfares were treated for icy conditions, neighborhood roads she used were not.

“It was sleeting on top of the road no matter if it [was] treated or not,” Meeks said. “Especially where there [was] paint [tended] to be slicker.”

Nation said the city stores one major stockpile of dolomite on Kramer Lane and distributes to stockpiles located at other service centers throughout Austin — on Dalton Lane, St. Elmo and Harold Court. According to Nation, the number of times the city has to replace the stockpile depends on how much the city uses per event.

Nation said the city monitors local weather forecasts and buys from a local vendor who transports the dolomite to the city’s service centers within 48 hours.

“We have some kind of emergency every year and we sort of prepare for it that way,” Nation said. “We either have ice or a little flood.”