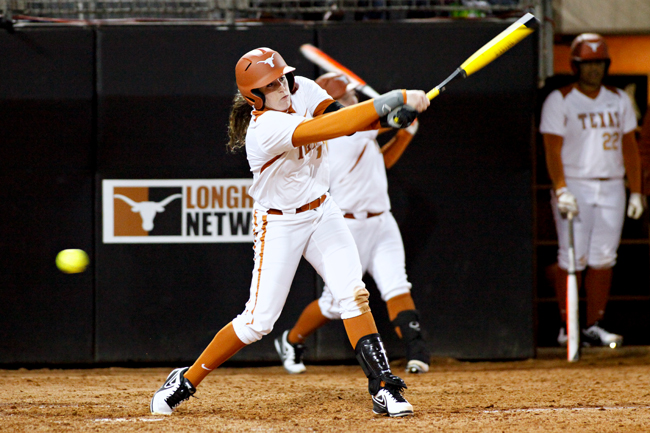 With sophomore outfielder Erin Shireman on deck, sophomore first baseman Holly Kern and the Longhorns whiffed in the home opener Wednesday night 4-2 to UTSA. After averaging six runs a game in its first sex games, No. 15 Texas struggled to score.

Getting runners on base was easy for the No. 15 Longhorns. Getting those runners across was another story.

Texas left 16 runners on base, while UTSA capitalized on its scoring opportunities as the Longhorns fell 4-2 for their first home-opening loss since 2007 Wednesday night.

“We were getting runners on and we were making things happen, but we weren’t getting them in,” sophomore first baseman Holly Kern said.

After averaging six runs in its first six games, Texas (4-3) struggled to score with runners on base. The Longhorns loaded the bases in five innings, but only scored in one, leaving 16 runners on base.

“We kind of needed to slow it down and look for that pitch and square it up,” Kern said. “And I don’t think we did a good job of that.”

UTSA (4-0) played a big part in contributing to Texas’ only two runs of the game, committing three errors in the second while Texas had just one hit in the inning.

The Roadrunners, on the other hand, took advantage of their opportunities. After trailing for most of the game, UTSA pulled within one in the fourth on a bloop RBI single and then seized a 3-2 lead on a two-run home run by junior catcher Megan Low.

“[Low] jumped on the first pitch and put a pretty good bat on it,” Smith said. “I kind of left it over the plate, and she hit it over.”

In the sixth, UTSA tacked on an insurance run with a triple followed by a sacrficial flyball.

Texas had a chance to tie the game in the seventh when freshman shortstop Devon Tunning and junior Marlee Gabaldon got to second and third, respectively, with one out, but senior outfielder Brejae Washington grounded out and sophomore Lindsey Stephens flied out to center field.

Junior pitcher Gabby Smith had a solid outing until the fifth inning. Smith had four strikeouts in five innings pitched.

Kern led what offense Texas had, going 2-for-4 and scoring the game’s first run of the game.

The loss is the third-straight defeat for the Longhorns, who began the year with four wins, including three victories against ranked opponents. Texas will be back in action this weekend, taking on Kentucky, Indiana University-Purdue University Fort Wayne and Louisiana Tech in the Texas Classic.

Going forward, Smith said the team can’t look back at these past few losses.

“We just have to stay positive,” Smith said.