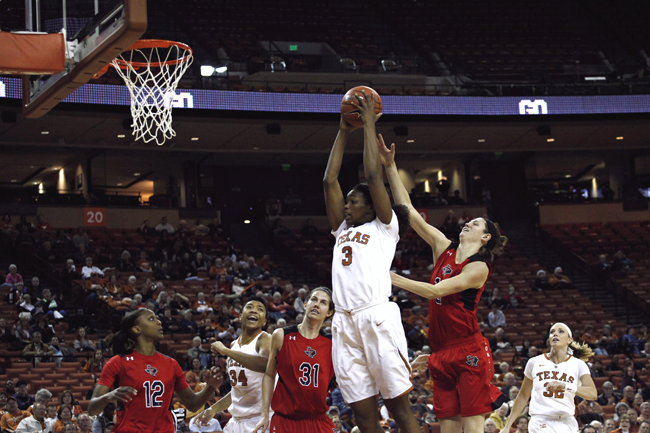 In need of an easy win against the second-worst team in conference, Texas struggled to pull away in Manhattan, Kan., against Kansas State, before eventually winning 69-63.

“It was not our best performance but, again, credit to K-State,” head coach Karen Aston said.

Although senior guard Chassidy Fussell eventually helped Texas secure the win with three rebounds and a team leading 15 points, the Longhorns were fighting for victory until the buzzer.

“I thought it was a hard-fought game that our team pretty much just grinded out,” Aston said. “It was tough.”

The game started off back and forth with a feisty Kansas State team (9-14, 3-9 Big 12) before the Longhorns pulled out to a 7-point lead at halftime. Texas looked in control and poised to make a run in the second half. After a 6-3 run to start the half, Texas’ 12-point lead looked commanding.

The Longhorns began to give way to the Wildcats, and, within five minutes, Kansas State’s Ashlynn Knoll put up eight points and the score was tied at 49. The Longhorns (16-7, 7-4 Big 12) kept pulling ahead, but the Wildcats seemed to always have an answer.

Freshman forward Nekia Jones finally put the Longhorns up for good — with just over six minutes to go — with a three to break a tie. Kansas State cut the lead to three with a minute left, but the leading scorer in the game — Fussell — hit a big three and sunk two free throws to ice the game.

“We had a better stretch of defense in the last seven to eight minutes,” Aston said on pulling out the win at the end. “We sort of turned our attention towards defending a little bit better.”

The Longhorns will take on No. 7 Baylor on Sunday in Texas’ annual “Shoot for a Cure” game at the Frank Erwin Center.