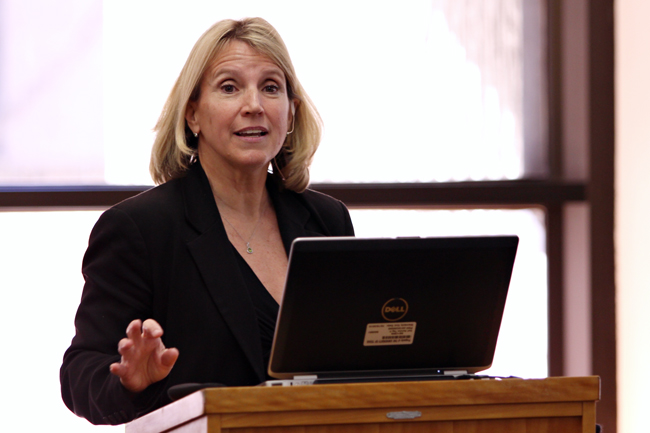 Molly Bray talks about dieting at the Perry Castaneda Library on Thursday afternoon. The lecture was a part of the Research + Pizza series hosted by UT Libraries.

Amid boxes of free pizza, nutritional science professor Molly Bray said some genes increase people’s inclination to be overweight by either giving greater satisfaction after eating or by suppressing the hormones that subdue appetite.

Bray — an expert on the genetics of obesity — presented her research on the biology behind resisting food temptations and maintaining fitness goals.

“Do people lose weights on [fad] diets?” Bray said. “They absolutely do … But there is a limit to wanting to eat like that.”

While Bray said trendy diets — such as the Atkins or fruitarian diets — provide the quick results people generally look for, she said the diets are largely unmaintainable and unhealthy because of the body’s decreased craving for repeated food items over time.

Bray said people often overlook the biology behind their pizza and bacon cravings and assume everything is willpower-based. Food can affect a person’s size, but Bray said genetics drive how your body responds to what you eat. According to Bray, genetics affect the body’s production of leptin — a hormone that regulates appetite by telling the brain you’re satiated.

Lindsay Wilson, a registered dietitian within the Division of Housing and Food Service said, while she can’t control what students choose to eat, DHFS does its best to ensure that healthy options are readily available.

Greek-yogurt-serving bars are available in J2 and Kinsolving Dining, hummus is available at all dining halls and DHFS made a whole-wheat option for breakfast tacos available at the beginning of the spring semester.

While eating well may encourage good health, Bray said exercise is also a necessary component for a fit lifestyle.

Bray is also the head of Training Interventions and Genetics of Exercise Response, an exercise research program coming to the University in the fall. The program focuses on how genes may alter responses to exercise and dietary intervention. In the program, which has been implemented at the University of Houston and the University of Alabama, students take various body measurements and physical tests before and after sessions over a span of 30 weeks.

Bray said even those with a genetic disposition to become overweight have been able to lose weight because of the course education and physical routine.

“It gives you some incentive to say, ‘I do not have to be a prisoner of my genes,’” Bray said.

Victor Silva, a finance and psychology senior, said he is a runner and believes determination is the most important factor for living a healthy lifestyle.

“At the end of the day, what results in you losing weight and getting results that you want is ultimately dependent on grit,” Silva said. “Genes just make it a little bit harder or easier.”