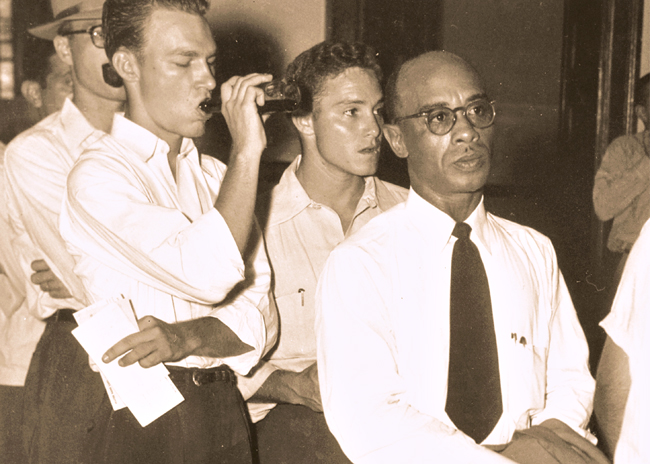 Photo courtesy of the Dolph Briscoe Center for American History

Heman Sweatt was the first African-Amercian admitted to the University of Texas in 1950.

Correction: This caption has been edited since its original publication. The photo is of Heman Sweatt.

The weeklong program begins this Sunday at 6 p.m. with students performing skits, dances and songs at the event What Started Here Changed Our World.

ImpactFULL Solutions, a student organization devoted to raising awareness about current events and culture, is one of the co-sponsors of the event. Morgan Burgess, ImpactFULL’s external communications coordinator, said it is important to have an event that inspires and mobilizes African-American students on campus.

“It’s an exploration of UT’s black history, specifically,” Burgess said. “Although we do focus on prominent black leaders during the civil rights period, it’s more focused on UT’s history. So it’s a different twist on Black History Month.”

What Started Here Changed Our World will include performances ranging from spoken-word poetry to live step by individuals and groups on campus, meant to showcase and celebrate the achievements of African-Americans on campus.

“We really wanted to capitalize on the gigantic accomplishments that we’ve had coming together as a group,” Burgess said. “So, we’ve got the first black Greek organization on campus, which was Alpha Kappa Alpha sorority. They will present on their organization’s founding and they also do step when they perform.”

As the first event of Black Empowerment Week, What Started Here Changed Our World provides a timeline of African-American history at UT. The program highlights important events in UT’s history, beginning in 1950 with the enrollment of Heman Sweatt — the first African-American student on campus — into UT’s law school, as well as the hiring of head football coach Charlie Strong in 2014.

“We hope that this event leaves people with a passion to actually cause change and to tell the stories of African-Americans and how they impact the campus and nation as a whole,” said Matthew Ealy, chairman of co-sponsor African-American Culture. “We want to start with a focus on UT and hopefully branch out to how African-Americans have contributed to the building and remaking of the United States.”

The purpose of What Started Here Changed Our World is not only to entertain, but also to provide community members with a more enlightened, comprehensive understanding of African-American history.

“I feel like with black history month, it forces people to pay attention to the history of what America has done to our race,” said Jacy Jordan, publicity officer for African-American Culture. “It’s catered to the black community, but it’s important that the whole campus knows the history of the black race and what we went through to be here. It’s important that we understand these things, so that we can all come together and grow.”

ImpactFULL and African-American Culture hope to inspire and motivate community members, specifically minorities, to unite and challenge their communities.

“We want this event to inspire,” Ealy said. “It started with one person. That’s essentially what we want to get across. You as one person can affect so much on this campus and even globally. You as a person have so much potential that you can cause a kinetic change.”

Correction: This article has been corrected since its original posting. Because of a reporting error, the story misspelled the name of UT's first African-American student. It is spelled Heman Sweatt. The story also incorrectly identified the year Sweatt enrolled at UT Law School. Sweatt enrolled in 1950.