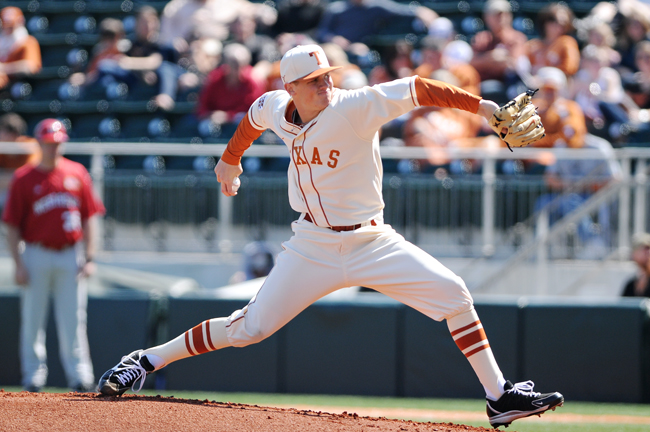 Junior pitcher Parker French will be the Longhorns' opening game starter against California on Friday. French will be the No. 1 Texas starter for the second consecutive season after posting a 4-5 record and a 2.68 ERA as a sophomore last year.

Texas enters the 2014 season as a team whose numbers tell the story.

The Longhorns will begin their season against No. 22 California in Berkeley, Calif. on Friday. Following a disappointing 2013 campaign in which they ended as just the 25th best team, head coach Augie Garrido knows a change in mentality is imperative.

“I don’t know how they will react to the adversities. That will be the next step,” Garrido said. “The truth of the matter is, OK there is your talent, but the other truth about it is — and all of you know — talent is important, but it does not end up winning the game. Teamwork ends up winning the game.”

The team Garrido was alluding to lost 15 games last year that were decided by two runs or less. But with seven positional starters returning with a 17-2 record when scoring five or more runs last season, that cushion they love should keep growing.

“We are trying to take the emphasis off of batting average and put the emphasis offensively on the true reason you win, and true reason you lose: run scoring,” Garrido said. “Make a contribution to run-scoring with the kind of outs they make and the timely hits they get. So, that is where we will be coming from, and we think we have the right attitude to be able to do it.”

Senior Mark Payton and sophomore C.J. Hinojosa return as the leading hitters for Texas, notching averages of .393 and .309 last season. Although the Bears return 23 players from last year’s squad, no starting pitcher recorded an ERA less than 3.00, which bodes well for the Longhorns looking for runs in bunches.

In addition to returning a huge portion of their starting lineup, the Longhorns also return 89 percent of their total innings pitched from last season, including the entire starting rotation that posted a stellar combined ERA of 2.29 last season.

“It’s refreshing [having the entire rotation back],” junior pitcher Dillon Peters. “I think we are all comfortable knowing what our roles are. We’re going to get after it the same way we got after it last year and just produce for our team and keep as many runs off the boards as we can.”

Junior pitcher Parker French, who finished last season with a 4-5 record and 2.68 ERA, will toe the line for the Longhorns on Friday night against a Bears team that finished eight games under .500 last year. Texas is 10-2 in season openers since 2002, and has won six straight.

The series between the two teams is tied at six wins apiece, but Texas is hoping to increase its win total to 10 after the four-game series this weekend.

Excited and hungry, Texas will start another trek to Omaha, Neb., with expectations that they will be in the No. 1 spot when that trip comes.

“We’re ready to get our feet wet, whether it’s raining or snowing,” Hinojosa said. “Everybody is ready to come out ready to grind it and groove for however long we get to play.”