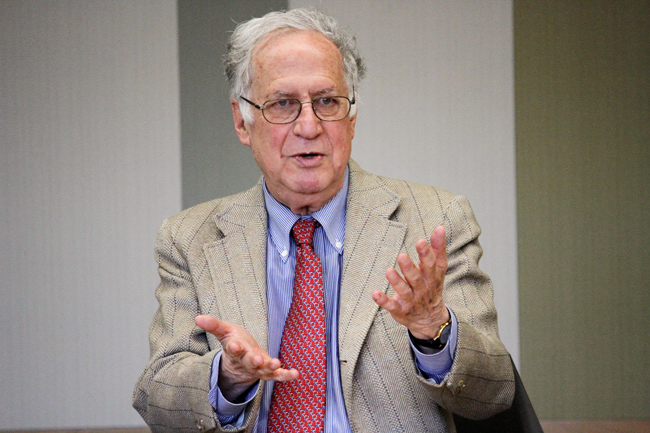 A disproportionately high number of Jewish women influenced the second wave of feminism in the 1960s and 1970s, according to Daniel Horowitz, an American studies professor from Smith College.

“There aren’t many prominent feminist writers of note in that period who weren’t Jewish,” Horowitz said.

In a lecture Thursday, Horowitz said he was a friend of Jewish writer Betty Friedan until he published the book “Betty Friedan and the Making of ‘The Feminine Mystique’” in 2000. The book exposed the secret of her communist past in the 1940s. According to Horowitz, Friedan’s first serious boyfriend at the University of California, Berkeley was a communist physics graduate student working on the atomic bomb. Horowitz said Friedan attempted to join the Communist Party herself in 1943, but was turned down because party leaders felt they already had enough intellectuals. In later years, Horowitz said, Friedan attempted to hide her radical past.

“There was a wonderful letter she wrote me once she realized what I was up to,” Horowitz said. “‘Dear Dan, How are you? How are the kids? How’s Helen?’ And then, ‘If you continue on this path, I will hire a lawyer and sue you.’”

According to Horowitz, Friedan did not write about Jewish culture in “The Feminine Mystique,” but instead focused the book on the struggle of middle class white women. Horowitz listed several other Jewish women who were a part of the feminist movement but never wrote about American Jews.

“They come out of a cosmopolitan universalist tradition in which the notion of womanhood or protestor is more important than the notion of Jewishness,” Horowitz said.

This may have been because they didn’t want their feminist goals to be overshadowed by their Jewish identity in the context of a wave of anti-Semitism in the middle of the 20th century, Horowitz said.

Sociology graduate student Carly Sheridan said she is currently taking a course about gender in the 1970s that has not mentioned the Jewish heritage of the feminists discussed in class.

“It’s not a popular topic that is often brought up,” Sheridan said. “These feminists are only known as feminists. I did not know they were Jewish.”

Robert Abzug, director of the Schusterman Center for Jewish Studies, said he asked Horowitz to come to the University because of his eminent work studying the crossovers between feminism and Jewish culture.

“His work, especially on Betty Friedan, opened up very big questions in the field on the roots of American feminism,” Abzug said. “He has now been developing the Jewish side of that.”