When piano playing encroaches on your study space 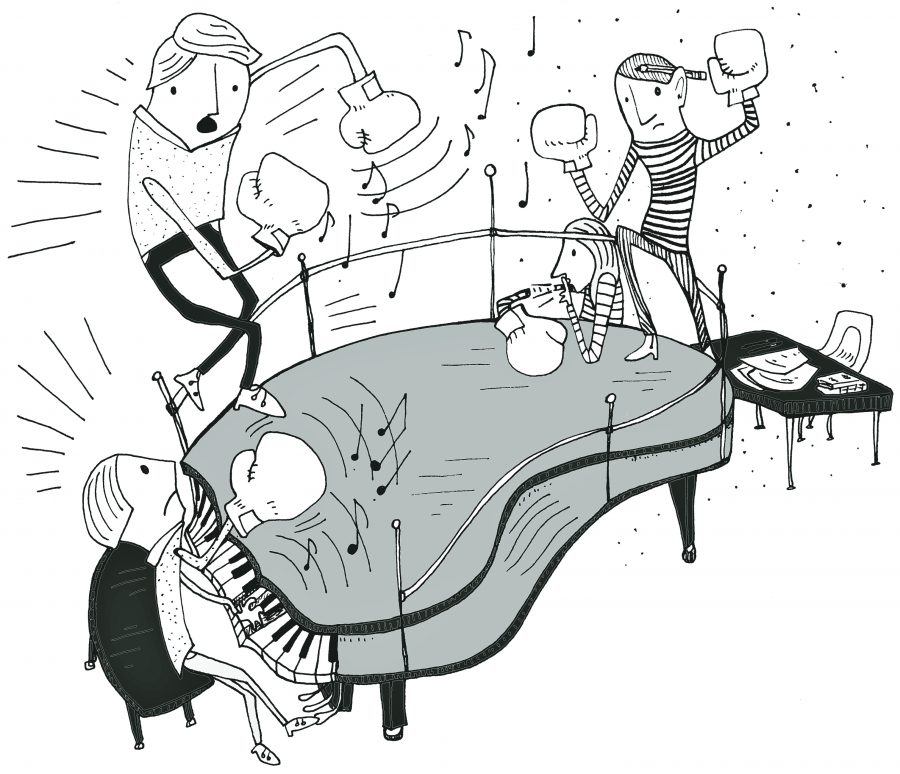 The lobbies at Carothers Dormitory, Andrews Residence Hall and Blanton Residence Hall are places where residents can congregate to work. But the appeal of these lobbies is not strictly academic; there are pianos in all three rooms, and they draw student piano players. As someone who has a hard enough time studying with my iTunes library on shuffle, the pianos in the lobbies serve as a distraction.

But when shared space is concerned, who wins out — the person studying or the one playing the piano?

There are playing hours in all of the lobbies from 10 a.m. to 8 p.m. But, despite the fact that there are multiple signs surrounding the pianos that clearly state these hours, the rules are widely ignored. Clearly, when artists are in their element, they can’t be bogged down with rules and regulations.

Every time a person makes his way to the piano, a part of me shouts out in internal protest. A quiet room, complete with stressed-out students frantically finishing papers and cramming for tests, doesn’t seem like the best environment to start tickling the ivories.

“I have never felt entirely comfortable doing so,” said Plan II Honors sophomore Gabe Colombo, who has played the piano in the Quad before. “Any time I play, people will hear, and, even if they’re not studying, there’s still the possibility that they just don’t want to listen to someone play the piano. I have to assume that people want to do what they’re doing without interruption.”

The Quad isn’t the only living space on campus with pianos. Other dorms, such as Jester and Kinsolving have them as well, but theirs are located in areas that otherwise wouldn’t be ideal study spaces. Kinsolving’s piano is directly outside its bustling dining hall, and Jester’s is right next to the J2 dining area, which overlooks the noisy first floor corridor of Jester West. Unlike the Quad lobbies, these locations aren’t conducive to studying any way, so the presence of a piano has little impact on students.

But every time I enter one of the Quad lobbies, I can’t shake the feeling that I’m handing over my rights to study in a quiet area to the piano player. In choosing to study in a place where there is a piano, a person tacitly agrees to the possibility of piano music.

“When you enter a space where there is a piano, you are [giving up your right to] complain when they [do so],” said junior John Murray, whom I found playing the piano in the Carothers lobby when I was working one morning.

As much as my peace-and-quiet-craving self hates to admit it, Murray is right: Places where there are pianos are the only viable option for practicing on campus. Practice rooms in the music school are “for Butler School of Music majors or students enrolled in music courses only,” as the Butler School of Music website states. All other students are forced to opt to practice in the lobbies.

“I sympathize with the pianists: It is often hard to find time/space to practice,” said Connor McCampbell, a Plan II Honors and business sophomore. “My one disappointment upon arriving to UT — a school that is known for fostering creativity — was finding inadequate resources for its student musicians.”

With this in mind, the University should most certainly allocate alternate, non-residential practice space for students. This would put an end to the long-fought battle between the piano player and studier. The dispute over who holds the rights to the Quad lobbies should be a jumping-off point, not a dead end. We all could do with a little less complaining and a little more compromise.

Berkeley is a Plan II Honors and advertising freshman from Austin.