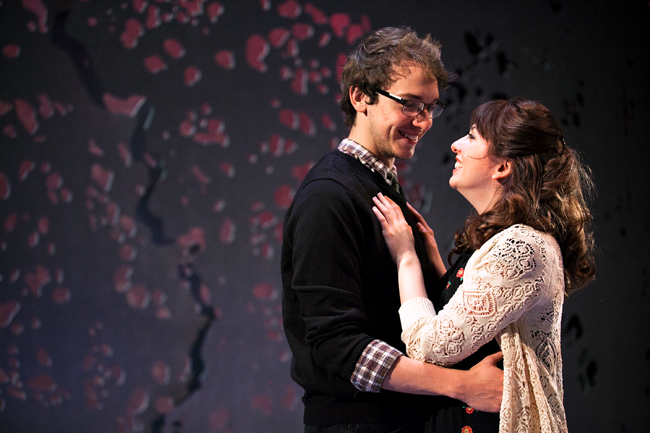 Photo courtesy of UT Department of Theatre and Dance

“Dead Man’s Cell Phone” is one of the few plays where audience members can expect to hear a phone ringing and not be annoyed by it.

The comedy, which opened Friday and is running through Feb. 23, is about a woman, Jean, who finds a dead man’s cell phone in a cafe. Jean decides to keep the man’s phone and learns about his life and those close to him as well as herself.

“I feel like a lot of times people get bogged down thinking a show is going to be an intensive thing to invest in, and this is not that kind of show,” said Mackenzie Dunn, theatre and dance and advertising senior,  who plays Jean. “I think that the kind of humor in this show is something everyone could enjoy. It’s really charming.”

Instead of the theater season’s usual faculty directors, “Dead Man’s Cell Phone” features a student director, Jessica Hutchinson, who is a second-year master of fine arts directing candidate. Hutchinson said UT’s talented undergraduate class of actors and tech students as well as the programs hands-on instruction drew her to the program.

“It’s one thing to work on scene work in class for the actors or do paper projects for the designers,” Hutchinson said. “It’s something else entirely to be able to take all of those skills and see a project all the way through.”

Because some of the actors know Hutchinson outside of her directorial role, they had to balance friendship with authority. This resulted in a collaborative and respectful rehearsal environment.

“A lot of people see theater as just a kind of fun thing — and it is fun and I love it for that — but it’s also our job,” said Tasha Gorel, history and theatre and dance senior who plays Gordon’s widow Hermia. “When I go into a rehearsal room there’s a certain demeanor and behaviors I put on. Just like anyone who would report for their job, I have a different kind of attitude.

As the director, Hutchinson was presented with many challenges, one of which was the style of author Sarah Ruhl’s text. Ruhl was a poet before she was a playwright, so her scripts tend to be written in a poetic style rather than traditional prose.

“One of the things that I love most about the show has also been a challenge for me,” Hutchinson said. “That is balancing Sarah’s beautiful poetry with the deep needs that are driving the scene, and making sure we are meeting leaning into that on both sides and finding a balance that serves the play and allows the actors to really shine.”

“It’s a pretty simple set,” Gorel said. “Because the language is so heightened, they wanted to make it clear and concise.”

Hutchinson said the play also deals with how people interact in the digital age and hopes their production will challenge students to think about the value of face-to-face communication.

“I see a lot of people on this campus — I do it too — buried in our phones and on our emails and Facebook and everything,” Hutchinson said. “Nothing can replace that experience of being together in a room together in a community with other people.”