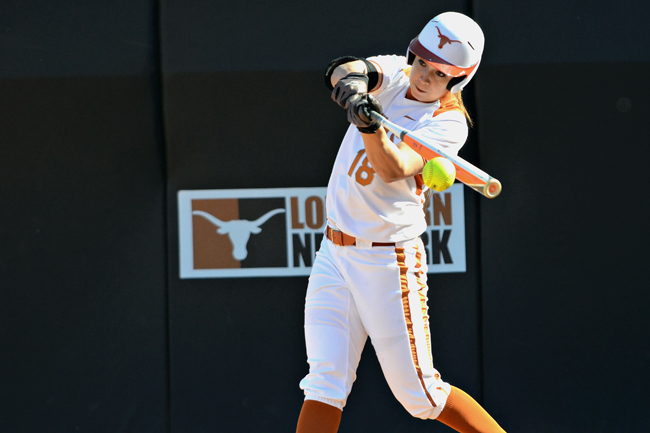 Junior pitcher Gabby Smith connected on two swings at the plate this weekend in the Texas Classic. Smith pitched twice this weekend, relieving sophomore Holly Kern in a 4-6 loss to Kentucky and pitching a complete game for a 10-2 win against IPFW.

The championship game of the Texas Classic summed up the weekend for the Longhorns.

Behind a three-run home run from senior catcher Mandy Ogle, No. 15 Texas battled back to tie No. 7 Kentucky in the fourth inning after falling behind 5-1 early on.

But the Wildcats scored on an error by senior shortstop Taylor Thom with the bases loaded, winning 6-5 to take first place in the tournament. The Longhorns (6-6) finished the weekend with a 2-3 record.

Kentucky took the early lead off of a Ginny Carroll solo home run and an RBI single by Emily Jolly in the second, until Texas cut the deficit in the bottom of the inning to 2-1 after a solo home run from sophomore right fielder Lindsey Stephens.

The Wildcats pulled ahead again in the top half of the third on a three-run home run by Lauren Cumbess only for the Longhorns to return the favor. With Ogle’s home run and a hit batter with the bases loaded, Texas battled back an inning later and tied the game.

Freshman pitcher Tiarra Davis, who struck out eight but gave up four walks in the losing effort, said the comeback tells a lot about the
team’s potential to learn.

The Longhorns’ tournament got off to a slow start Friday, scoring only six runs against Kentucky and IPFW. Kentucky pitcher Kelsey Nunley held Texas to only four runs and struck out five while the Wildcats capitalized on two errors and a two-run home run to take a 6-4 win.

In the night game, IPFW pitcher Miranda Kramer found similar success against Texas, striking out 12 Longhorn batters and stranding nine runners on base. With the game tied at 1-1, the Mastodons scored twice in the top of the eighth and held the Longhorns to only one run in the bottom of the inning to secure a 3-2 win.

Texas came out firing on Saturday, with five straight hits en route to a five-run first inning against Louisiana Tech. Freshman pitchers Lauren Slatten and Davis combined to give up only two runs while striking out seven batters in the 7-2 win.

The hit parade continued for Texas in the second game of the day against IPFW. The Longhorns scored in every inning to take a 10-2 run-rule win in the semifinal matchup. Junior pitcher Gabby Smith had a complete game two-hitter with no earned runs.