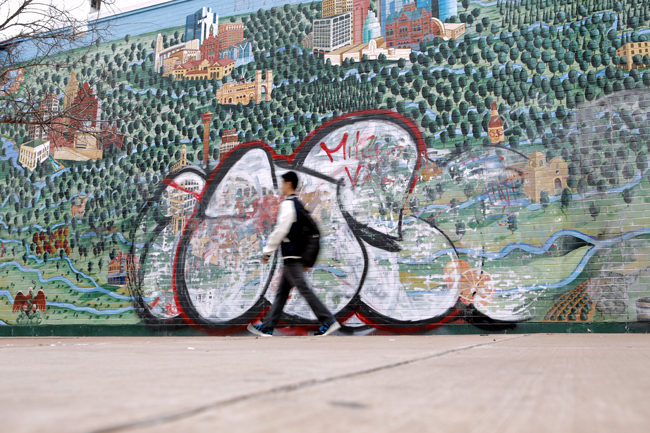 A student walks by the 40-year-old Austin mural on 23rd street. and Guadalupe that was recently vandalized. The Austin City government, University Co-op, and the original artists are looking to crowdsource funding to complete the restoration process. " />

A student walks by the 40-year-old Austin mural on 23rd street. and Guadalupe that was recently vandalized. The Austin City government, University Co-op, and the original artists are looking to crowdsource funding to complete the restoration process.

After public outcry over the defacement of two murals near 23rd Street and Guadalupe, the original artists, the University Co-op and Austin officials have removed the majority of the graffiti and are crowdsourcing funds to finish the restoration process.

Brian Jewell, University Co-op marketing vice president, said a co-op security guard first noticed graffiti on the 40-year-old mural, located on the south wall of the Renaissance Market area, on Jan. 7. Jewell said the guard did not see anyone deface the murals, and no security footage of the area was available, so the co-op could not file a report with Austin police. Jewell said the graffiti removal is nearly complete, and the co-op and original artists are raising funds through online donations to begin restoring the murals in mid-March.

Jewell said the mural is an important part of Austin history.

“[The mural] is 40 years old, and it’s an iconic symbol of Austin,” Jewell said. “It’s almost a rite of passage to view it.”

Kerry Awn, one of the murals’ original artists, said he did not realize the mural was important to the public until he witnessed the extensive media coverage done on it.

“It took the whole public to let me know that people care about it,” Awn said. “In a weird way, it’s kind of a good thing.”

According to Awn, he and the two other original artists — Tommy B and Rick Turner — will complete the restoration over the course of 10 weeks from March 15 until June 1. Awn said the co-op will take additional measures, such as installing cameras and additional lighting in the area, in an attempt to prevent additional acts of vandalism toward the mural from occurring.

Narum said she thinks the amount of graffiti has increased, forcing the city to dedicate additional funds to graffiti removal.

“It’s, in part, a growing pain,” Narum said. “There are so many events, so many visitors.”

Narum said graffiti is more common in places where there is more pedestrian traffic, but she said business owners sometimes paint murals to try to deter graffiti.

“When [vandals] did the [graffiti] at the co-op. To me, that means they have gotten really bold,” Narum said. “The [graffiti on the] murals have proven there’s no respect anymore for the murals.”

Jewell said he thinks it’s important to preserve the murals for later generations to view.

“It should be preserved,” Jewell said. “Not just because we should always preserve something, but because its helped define Austin.”