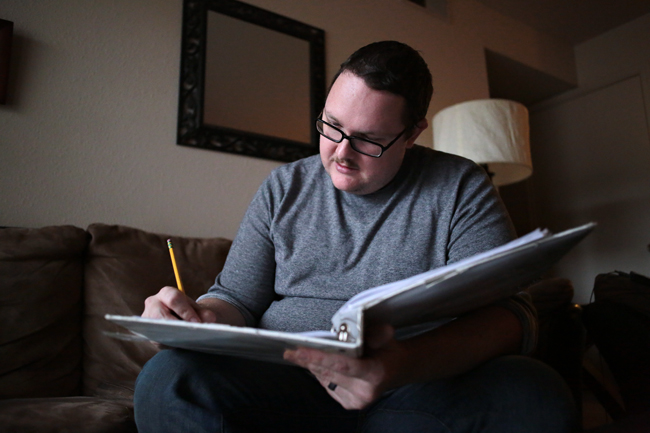 Michael Floyd believes the true reward of his work is in listening to the audience and not to the critics. He wants people to feel something after a performance.

“Every play is interesting,” Floyd said. “Some of them are extremely funny, and some of them are melancholic. Even some of the most outlandish scenarios in the play have some real-life emotions — things that real people think about or feel.”

An Austin resident since late 2008, Floyd initially moved here to mend a troubled relationship. After witnessing Austin’s arts and theater community, he decided to stay and make the switch to directing.

“As an actor, I was a puppet on stage,” Floyd said. “I wanted control. Directing started with ego, but after that it was about wanting to entertain people and to make people think, and touch their hearts and minds with great work.”

Floyd prefers directing for stage rather than directing films. While he hopes to make more films in the future, directing plays remains his focus for now.

“There’s an audience out there, and they’re watching you,” Floyd said. “You can actually feel them connecting with you and that connection between the audience and the performer, that is inspiring to me, and that is what makes me want to do more and more theater.”

In late 2012, Floyd and a friend formed a theater company, Untitled Theatre Works. The company was created to help new artists, directors, technicians and people with little or no experience in theater learn the ins and outs of the industry.

Kris Dillon, company member at the theater company, met Floyd when she interviewed with him in 2010.

“He really has a clear vision of how he wants to stage the production before going into rehearsals,” Dillon said. “You can tell that [Floyd] has a solid education, as well as experience behind him.”

During the making of the company’s production “Dahlia” in 2012, Floyd met Jordan Plessala, an actor who was auditioning for the role of the main character’s wife.

“[Floyd] is an actor’s director,” Plessala said. “He makes an excellent director, but a poor friend, because he’s horrible for your ego. [Floyd] has made me feel like a superhero or like someone who could win an Oscar.”

Floyd is currently working to develop his directorial skills.

“What has been more challenging to me has been directing,” Floyd said. “Directing doesn’t come naturally to me, but you can always learn more and you can always become better at whatever you choose to do.”