Longhorns in the NFL draft: Chris Whaley hopes to follow Henry Melton’s path to success in the NFL 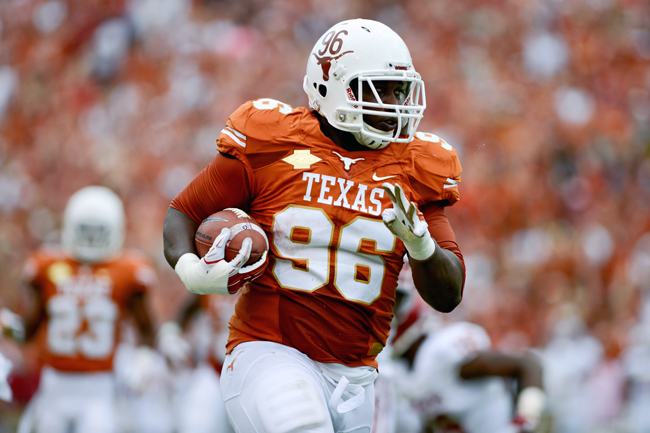 It was third and four for the Sooners with the game tied at 3. Chris Whaley dropped into coverage and into the perfect spot as the blitzing safety, Adrian Phillips, forced a pass right into Whaley’s hands. Whaley rumbled down the field, bulldozing the “Belldozer” to score his first collegiate touchdown and help the Longhorns grab a 10-3 lead they wouldn’t relinquish in the 2013 Red River Rivalry.

The fact that Whaley’s biggest play in burnt orange was a touchdown wouldn’t have come as a surprise to anyone in 2009; after all, Whaley was ranked by ESPN as the 72nd best recruit in the nation as a running back coming out of high school. But now, coming out of college, he is the 27th best defensive tackle, according to NFLDraftScout.com.

Whaley’s journey from running back to potential NFL defensive lineman spanned over five years at Texas. In 2009, then-head coach Mack Brown opted to take Whaley as the lone running back for the class, but he was redshirted in his first season on the 40 Acres.

In 2010, Whaley saw limited playing time and began bulking up, ultimately getting too big to play running back.

That spring, Whaley finally made the move to the defensive line.

The 2011 campaign was filled with collegiate firsts for Whaley as he recorded his first tackle in the season-opener against Rice, his first sack against Kansas, his first start against Baylor and his first fumble recovery against California in the Holiday Bowl.

With elevated expectations in 2012, Whaley struggled to make a significant impact on a historically bad Texas team against the run.

But 2013 was a different story for Whaley, starting with the Red River Rivalry.

The Longhorns entered the game as huge underdogs, but thanks to Whaley’s pick-six, they were able to dominate the Sooners.

Two weeks later, Whaley scored his second touchdown of his career on a momentum grabbing “scoop and score” against Kansas, becoming the first defensive tackle in school history to score two defensive touchdowns in a season.

His elevated play had him climbing the draft boards. Draft experts began talking about Whaley as a potential Day 3 name.

Then a season-ending knee injury against West Virginia abruptly ended his Texas career and his climb up the draft boards.

Whaley was invited to the NFL Scouting Combine, but it is unknown if he will be able to participate as he recovers from his knee injury. Currently, he is expected to go late in the draft or to have to sign on as a free agent.

If Whaley can sell himself like former Texas running back-turned-Pro Bowl defensive tackle Henry Melton, he should be able to make an NFL roster. Physically, both Melton and Whaley are officially listed at 6-feet-3-inches and 295 pounds, but Whaley actually has an extra season of collegiate experience on the defensive line. Whaley also needs to prove that his knee has recovered. If he can do this, his knack for making the big play late in his college career should help him make an NFL roster.

Read about the three other Longhorns who will be entering the NFL draft: