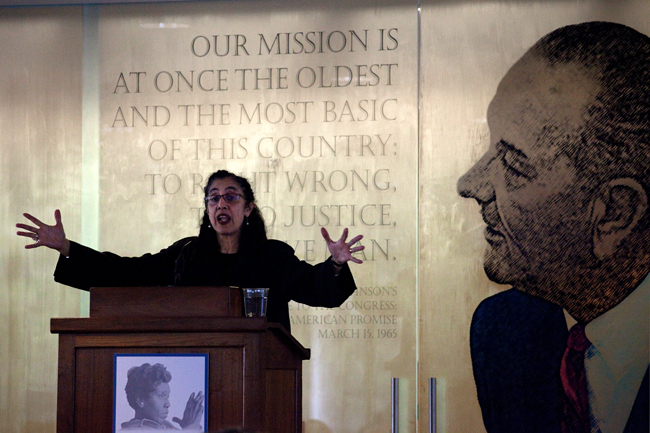 LBJ School dean Robert Hutchings said in a press release that the presence of Guinier, a prominent civil rights lawyer, is especially timely because the school is celebrating the 50th anniversary of the Voting Rights Act this spring.

“We really need to embarrass the United States in its claim that [it is] the world’s most important, significant and honorable democracy, when we have such a small percentage of our population participating in any election,” Guinier said in regard to new voter ID laws that critics have called unnecessarily restrictive. “We have in many ways abdicated our commitment to democracy in the name of democracy.”

Guinier said maintaining civil rights accomplishments of the past, such as the Voting Rights Act, will require continued cooperation not only to ensure progress but also to avoid worsening issues of the past by assuming they are no longer problems.

“What was new to me was [not only] how she brought up the past and where we were but also how far we still have to go,” said Judith Mitchell, a former social worker at the Counseling and Mental Health Center.

Mitchell said it’s still hard to have an open and frank discussion about diversity, even within a progressive setting such as the University.

Guinier said we should model current efforts to advance civil rights after the leadership style of Nelson Mandela.

“Nelson Mandela said that you really need to think about leadership the way a shepherd leads a flock,” Guinier said. “The shepherd does not stand in front of the flock and say, ‘Hey, follow me.’ The shepherd identifies one or two individual sheep who are moving in the right direction and then corrals the rest of the flock to follow the leader.”

Bea Ann Smith, a law professor, former judge of the Texas Court of Appeals, Third District, and longtime friend of Barbara Jordan, said she loved Guinier’s speech because the issues of diversity and voter ID laws are problems that require cooperative solutions.

“I thought her idea about leading from behind seems very appropriate right now,” Smith said. “Collaboration and consensual leadership instead of authoritative leadership is much more effective.”